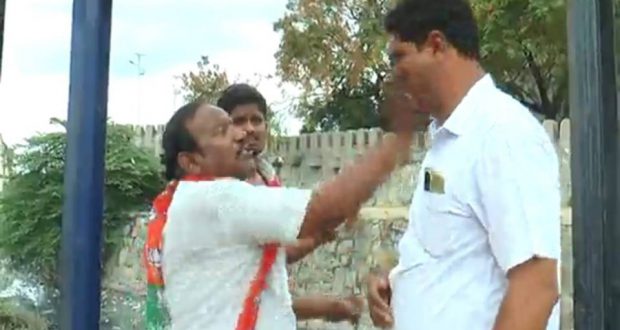 Enraged for being prevented from burning an effigy of Congress leader Siddaramaiah during a protest, BJP leader and former MLA A. Papareddy slapped a police constable in plain clothes in Raichur on Wednesday.

A video clip of Mr. Papareddy arguing with the police constable Raghavendra attached to Raichur West Police Station and slapping him went viral after the incident.

The incident happened during the BJP Scheduled Castes Morcha’s protest against the Leader of Opposition in the Assembly Siddaramaiah who had, during a recent election rally in Sindagi, reportedly said that Dalit leaders had quit Congress and joined BJP to secure their livelihood.

Alleging that the former Chief Minister had insulted the Dalit community, the BJP activists attempted to burn an effigy of Mr. Siddaramaiah. However, a few policemen in mufti, including Mr. Raghavendra, prevented them and took away the effigy from the protest site. It was then Mr. Papareddy followed the policemen and slapped Mr. Raghavendra.

The BJP activists later collected the effigy and burnt it.

Speaking to the media after the incident, Mr. Papareddy said that he took the policeman in mufti for a BJP activist participating in the agitation.

“He [the police constable] was in plain clothes and I thought he was our activist. He had held a BJP flag and took the effigy away from the protest site… Siddaramaiah has been verbally attacking BJP leaders, especially Prime Minister Narendra Modi and Chief Minister Basavaraj Bommai. Congress had burnt the effigy of Mr. Modi many times. They had burnt the effigy of [BJP leader] B.S. Yediyurappa] in front of Vidhana Soudha. Why did the police prevent them from doing it then? Why do they have so much love for Mr. Siddaramaiah? Burning effigies of political leaders has been there for decades. But the police have attempted to prevent us from burning Mr. Siddaramaiah’s effigy,” Mr. Papareddy said.

To a question, Mr. Papareddy refused to apologize to the constable, instead, he demanded action against him for infiltrating into the protesting party workers and disturbing them.

Speaking to The Hindu on the incident, Raichur Superintendent of Police Nikhil B said that a case would shortly be registered against Mr. Papareddy.

“I came to know about the incident and I am now meeting the constable for gathering more information. We cannot let it go. We have taken the issue seriously and will book a case shortly,” Mr. Nikhil said. 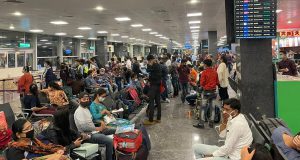