The North Western Karnataka Road Transport Corporation (NWKRTC) has put up posters in all its buses that asking for ‘change’ may be treated as interruption of duty of a public servant and if found guilty, the law will impose 3 years of imprisonment. NWKRTC covers six districts and has eight divisions, which is across 4,428 villages of the state.

While travelling on public transport, clash of words over change between commuters and transport staff is nothing new. The non-availability of certain denominations of currency flares up heated arguments which has often led to issues like stopping of buses for hours. Fed up of all these repeated scenarios, NWKRTC decided to put up these posters across all its buses.

Commuters who boarded buses were shocked to see these posters and said “I checked my purse if I really have the exact amount. After confirming, only then I decided to continue my journey. Three years in jail for not having change, really? People will shift to private buses if RTC continues with this rule” said Kempanna Havaldar, a school teacher in Bagalkot. He travels in NWKRTC buses everyday.

“Under section 21 of the Indian Penal Code, the Supreme Court has identified NWKRTC drivers and conductors as public servants. So disrupting duty or assaulting the driver or conductor from performing duty is a punishable offence. Under section 332 and 353, three years imprisonment and under section 186 of IPC, 3 months’ imprisonment can be the result if not followed,” says the note in Kannada.

Various RTC across Karnataka are discussing going cashless to avoid clash-for-change. But for this to be implemented, it will take time. However, chief traffic manager of NWKRTC in Hubballi said that staff can request the public to cooperate by giving proper change. The boards will be removed at the earliest, he added. 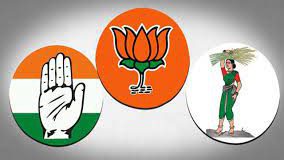