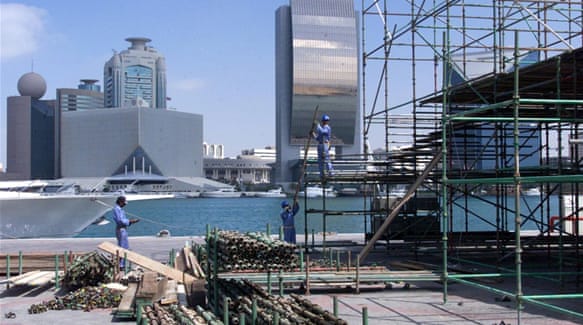 Indian migrants on visit visas – quicker and cheaper to obtain than work permits – are wary of reporting exploitation on the job for fear of revealing their illegal status, they say.

The scale of the problem is unknown as visit visas do not appear in Indian or UAE migration or employment records.

But workers, police and lawyers said the practice is on the rise in a nation with more than three million Indian migrants, often hired at short notice to work on large construction projects.

“Employers and recruiters have colluded and invented this visit visa route,” said Bheem Reddy, president of the Emigrants Welfare Forum in the southern Indian state of Telangana.

Reddy’s charity estimates at least 10,000 migrants from the state – just one of 29 in India – have found work in the UAE having entered the country on visit visas since July last year.

A demand for short-term workers in the run-up to big events such as Dubai’s Expo 2020 world fair in October has further fuelled the scam, a United Nations official said on condition of anonymity.

No workers’ rights
Indian migration into the Gulf has been steady for decades but using tourist visas to abuse workers is new, activists say.

Anuradha Vobbilisetty, who works on migrant labour cases in Dubai courts, said she had supported about 270 workers on tourist visas since 2018 who had not been fully paid.

Whereas work permits are issued by embassies and leave a paper trail, visit visas are sold by hotels and airlines, giving workers no rights and freeing employers from all responsibility.

“Their passports were taken by agents at the airport itself, they didn’t get paid for months,” Vobbilisetty said.

“But they continued working without salaries as they feared complaining about working illegally,” she said, adding that 227 of the workers ended up being paid after the police stepped in.

The number of complaints made by Indian migrant workers against recruiters relating to jobs overseas tripled to more than 600 between 2016 and 2019, according to government data.

Many Indian workers in the Gulf – from cleaners to builders – say they have spoken to the government and charities about abuses from withholding wages and debt bondage to torture.

Scared to speak out
More than a third of the UAE’s registered eight million migrant workers were Indian nationals as of 2017, the latest United Nations data shows.

Yet the number of Indians going to the UAE, at least officially, has dropped due to an economic crunch and the rising use of visit visas, India’s external affairs ministry has said.

India’s consul general in Dubai – the UAE’s most populous city – said workers using the official channel are protected as details of the employer and the recruitment agent are recorded.

UAE embassy officials in India said they had no record of migrants working in the country after entering on visit visas.

Some smaller employers cut corners and save costs with the visit visas, said Sureshkumar Madhusudanan of the Federation of Overseas Recruitment Associations of India, an umbrella group.

Many employers also use visit visas to hire workers quickly then convert them to work permits, according to activists.

Mohammad Pasha lodged a police complaint in Telangana last November against a job agent who arranged a supermarket job for him in Dubai on a visit visa.

When asked by police at Mumbai airport if he was going for work, Pasha lied and said he was sightseeing as the recruiter said he risked jail if the authorities discovered the truth.

Pasha said he worked 16-hour days without overtime and was paid 800 dirhams ($218) monthly, not the 1,000 promised – but his employer warned him to keep quiet.

“They said I would be behind bars if I spoke up,” he said by phone from Telangana. “I wanted to approach the labour court but I was scared as I was working illegally on a visit visa.”

After three months in Dubai, Pasha gathered enough money to fly home. Telangana police said they had arrested the agent and his accomplice – who had got Pasha the job and his visa – for fraud and launched awareness-raising campaigns in villages.

“We are telling them (would-be migrants) that these (visit) visas are different from job visas,” said officer Upender Reddy.

Bheem Reddy, of the Emigrants Welfare Forum, questioned whether Indian authorities were being vigilant enough when examining migrants leaving the country to work abroad.

“It is visible whether they are real tourists or going for employment,” he said. “A visibly poor labourer going in slippers for tourism … how is this being allowed?