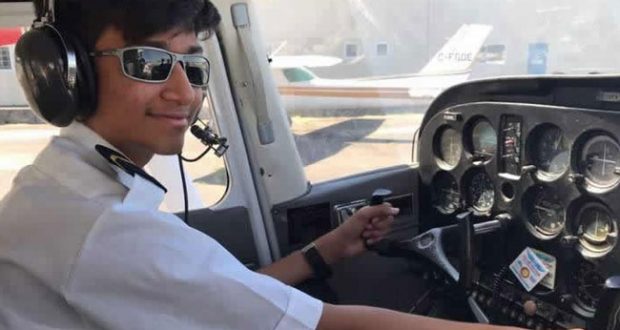 Dubai: A 14-year-old Indian-origin schoolboy in the UAE has become one of the youngest pilots to fly a single-engine aircraft, according to a media report.

His solo flight was about 10-minute-long during which he taxied the aircraft from the parking bay to the runway, took off for a flight of about five minutes and landed back, the report said.

Mansour, who flew a Cessna 152 aircraft during his solo flight, now has a student pilot permit. Apart from the flying test, he has also passed a radio communication test and scored 96 per cent in the PSTAR Test, an eligibility test for Transport Canada.

“Let it be known throughout the aviation world that Mansour Anis at the age of 14 years successfully took off and landed from Langley Regional Airport thereby accomplishing his first solo flight,” the solo flight certificate issued by AAA Aviation Flight Academy on August 30 stated.

Ali, a civil engineer in Sharjah, said he had sent his son along with his wife Munira, a chemistry teacher, to Canada for the training session during the summer holidays.

In some countries, like the US and the UK, a person has to be at least 16 years old before taking to the air on their own. In the UAE and India, the pilot has to be at least 18 to be eligible to fly. However, in Canada, 14 is the minimum age for student pilots to join the course and try flying after meeting the requirements, he said.

Munira said that her brother Qaid Faizy, a pilot with Jet Airways in India, has been an inspiration for Mansour since his childhood.