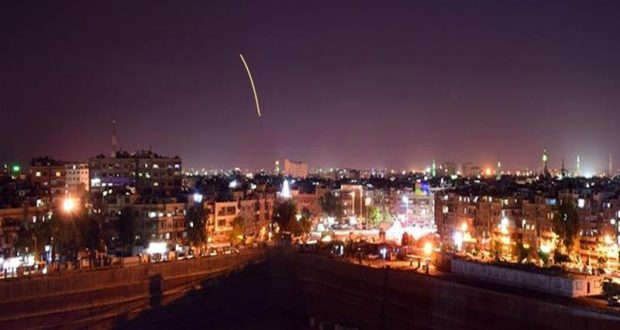 Israeli planes targeted a military position near the Syrian province of Hama wounding six soldiers, but the country’s air defences intercepted and downed some of the rockets, Syria’s state news agency reported.

Citing military sources, SANA news agency and state television said that Israeli aircraft using Lebanese airspace targeted “one of our military positions towards the city of Masyaf” and that several buildings were destroyed.

“The enemy missiles were dealt with and some of them were shot down before reaching their target, resulting in the damage of a few buildings and the injury of three fighters,” SANA added.

The Britain-based Syrian Observatory for Human Rights said the Israeli air attacks hit three targets, wounding 17 Syrian soldiers. It said there were also deaths, but it was not immediately clear how many were killed.

It said the targets were a military academy as well as a missile development centre in a village near Masyaf.

The Israeli military does not usually comment on reports concerning its air attacks in neighbouring Syria though it has recently acknowledged hitting what Tel Aviv claims are Iranian targets in Syria.

The last such attacks that Israel announced were in late March. There was no immediate comment from Israel.

Since the civil war started, Israel has carried out scores of military air bombings in Syria against suspected arms transfers and deployments by Iranian forces and their Lebanese Hezbollah allies which are backing Syrian President Bashar al-Assad.

Previous: PUBG mobile banned in Nepal after parents complained
Next: Fellow BJP MP Hema Malini hits out at Maneka Gandhi over ‘vote for me or else…’ remark on Muslims