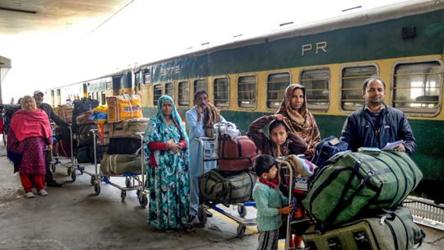 Islamabad has ‘shut down’ the Samjhauta Express train service between India and Pakistan, its railway minister Sheikh Rasheed announced on Thursday. Indian officials, however, say no formal notification to this effect was issued by Islamabad.

Indian Railway said that the train was stopped at Wagah border and arrangements were being made to bring the stranded passengers to India.

“#Samjhautaexpress. Train will run. Train is being moved from Wagah and it will come to Attari,” said an official tweet from Indian railway ministry.

Before Pakistan Minister’s tweet surfaced, Indian railway sources said, “Pakistan had raised some concerns with regards to security for crew and guard of the Samjhauta Express and they were told that the situation was normal on this side . However we are sending our own engine with our crew to bring train from Wagah to Attari.”

Station master of Attari railway station close to border with Pakistan, Arvind Kunar Gupta said, “We got a message from Pakistan railways that the crew members and guards of Samjhauta Express refused to take the train into Indian territory. They allowed us to send our driver and staff to take the train from Wagah.”

As per information, Samjhauta Express was stuck at Wagah railway station on the Pakistan side since 9:30 am.

There are about 110 passengers on board the train stuck at Wagah and about 70 waiting to board the train to Pakistan on its return journey, said the railway source quoted above.

The move comes after Indian Parliament okayed scrapping of Article 370 in Jammu and Kashmir and dividing the state into two Union Territories. This was strongly criticised by Pakistan, which held a special session of its Parliament to condemn the issue and later decided to downgrade ties with New Delhi.

Previous: Death toll rises to 11 in Karnataka floods, over 40,000 people evacuated
Next: 10 killed in Ohio in second mass shooting in 24 hours