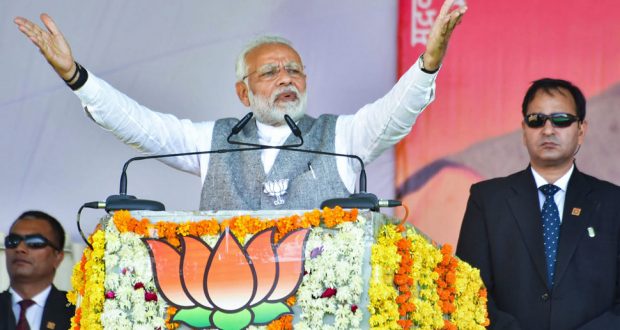 rime Minister Narendra Modi will be honoured with an award from the Bill and Melinda Gates Foundation for his initiative of Swachh Bharat Abhiyaan campaign, in yet another feather in his cap. The PM will be conferred with the award during his visit to the US in September.

Taking to microblogging site Twitter, Minister of State for Development of North Eastern Region, Jitendra Singh, made the announcement, adding that it is ‘another moment of pride for every Indian’.

“Another award, another moment of pride for every Indian, as PM Modi’s diligent and innovative initiatives bring laurels from across the world. Sh @narendramodi to receive an award from Bill & Melinda Gates Foundation for #SwachhBharatAbhiyaan during his visit to the United States,” tweeted Singh.

The award from Bill and Melinda Gates Foundation will get added to the list of many accolades and awards conferred upon PM Modi since he assumed his office in 2014.

The United Arab Emirates (UAE) conferred its highest civilian honour – ‘Order of Zayed’ on PM Modi in August. The award was presented to the Prime Minister by Abu Dhabi Crown Prince and Deputy Supreme Commander of the UAE Armed Forces Mohamed bin Zayed Al Nahyan at the Presidential Palace in Abu Dhabi.

In April 2019, Russia awarded its highest state honour ‘Order of St Andrew the Apostle’ to PM Modi for promoting bilateral and strategic partnership between the two countries.

Previous: Kulbhushan Jadhav appears to be under extreme pressure to parrot a false narrative, says MEA
Next: 4-yr-old boy missing in Bengaluru, feared to have slipped into a stormwater drain