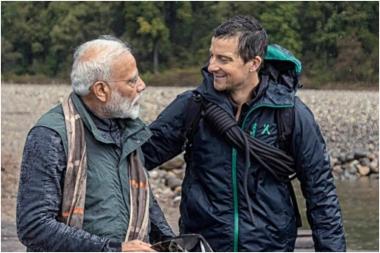 Narendra Modi on Sunday addressed a question that several viewers of the Man vs Wild episode featuring the Prime Minister had been left pondering about — how he and Bear Grylls managed to effortlessly converse despite speaking in different languages.

“There is no mystery to this,” Modi said. “Technology was used in my interaction with Bear Grylls. Whenever I would say anything, within moments it would be translated into English. A simultaneous translation would be transmitted to a small device in his ear. This made our interaction easy.”

In the most recent instalment of Mann ki Baat, PM Modi launched a ‘Fit India’ movement that aims to “keep the country fit” and a mega festival on October 2, the 150th birth anniversary of Mahatma Gandhi.

“When we celebrate Mahatma Gandhi’s 150th anniversary, we’ll not only be dedicating to him an open defecation free India but also kickstarting a mass movement for making India plastic-free. I appeal to all to celebrate this year’s Gandhi Jayanti by freeing Mother India of plastic,” PM Modi said.

In his first episode of ‘Mann Ki Baat’ programme after Lok Sabha elections on June 30, Modi discussed various topics such as the Emergency, water crisis and International Yoga Day. He had also urged people to inculcate a habit of reading books regularly.

In the second episode of ‘Mann Ki Baat’ which was aired a week before the abrogation of Article 370, the Prime Minister had discussed Kashmir, saying that “those who spread hatred will never succeed in their nefarious plans”. He had also asserted that the power of development was stronger than the might of “bullets and bombs”.

The programme is broadcast
on the last Sunday of the month and suggestions, stories and ideas are invited from people for it.