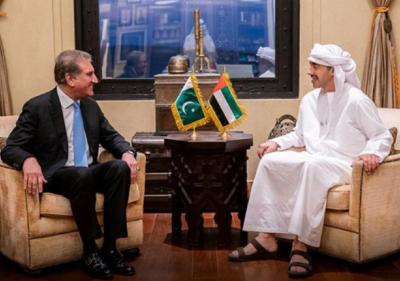 In yet another humiliation for Pakistan, visiting UAE Foreign Minister Sheikh Abdullah bin Zayed bin Sultan Al Nahyan said that Kashmir is not an issue which concerns Muslim Ummah (community) and is only a dispute between Islamabad and New Delhi. The minister further urged Pakistan and India to resolve the matter through talks between them.

Foreign Ministers of the United Arab Emirates (UAE) and Saudi Arabia arrived in Islamabad on Wednesday to discuss the Kashmir issue that has been persistently internalised by Pakistan since India changed the constitutional status of the region.

Pakistan’s PM Imran Khan had sought a clear and unequivocal message on Kashmir from the foreign ministers of Saudi Arabia and the UAE.

The UAE had recently conferred Prime Minister Narendra Modi with its highest civilian award – Order of Zayad, despite protests by Pakistan.

The UAE was also the first country from the Organisation of Islamic Cooperation (OIC) member states to support India over its decision to abrogate Article 370 in Jammu & Kashmir thereby ending the special status.

The Saudi Foreign Minister had earlier visited Pakistan in March in order to de-escalate tensions between New Delhi and Islamabad after India carried out pre-emptive airstrike at Khyber Pakhtunkhwa’s Balakot.

Ever since the Indian Parliament revoked Article 370 and Article 35 (A) of the Indian Constitution that accorded special status to the region last month, Pakistan has been reaching out to numerous countries, including the Middle East, and China. However, its effort to internationalise the issue has failed.

Pakistan has been repeatedly snubbed by the international community over its efforts to corner New Delhi over Kashmir with all the parties denying any third party interference calling it “strictly internal” matter of India.

Instead of focusing on important issues like struggling economy, foreign debt, rising inflation, and poverty, Pakistani leadership is more concerned about Kashmir, with the Foreign Minister himself briefing the United Nations over the issue more than thrice in a month.

Meanwhile, the Asia Pacific Group of the FATF, a global watchdog for terror financing and money laundering, is set to evaluate Pakistan’s anti-terror efforts next week.

The Home Ministry is preparing to raise two additional battalions, one each of the Border Security Force (BSF) and the Central Reserve Police Force (CRPF) in J&K.

Pakistan has also moved a brigade-sized force of around 2,000 soldiers 30 km near the Line of Control (LoC) in Pakistan-occupied Kashmir.

Previous: Zimbabwe’s former president Robert Mugabe dies in Singapore
Next: Your Android phone could be hacked by a single text message