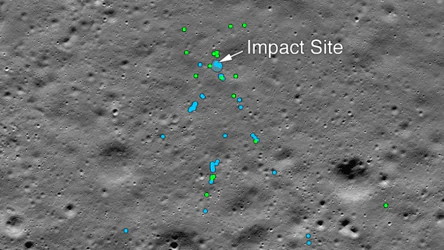 Almost three months after Chandrayaan 2—India’s second mission to moon— went awry in the last 2.1km of its journey, US space agency Nasa has located the lander with the help of observation made by an Indian engineer.

After 48 days in Earth and lunar orbit, the Vikram lander and Pragyan rover that had been indigenously developed were to soft-land on the lunar surface on September 7.

The “hard landing” was confirmed officially by the minister of state for the department of Space Jitendra Singh in the Parliament.

“The velocity was reduced from 1,683m/s to 146 m/s. During the second phase of the descent, the reduction in velocity was more than the designed value. Due to this deviation, the initial conditions at the start of the fine braking phase were beyond the designed parameters. As a result, Vikram hard landed within 500m of the designated landing site,” Singh said in a written reply.

Nasa’s orbiter had captured the first set of images of the landing site on September 17, when it was lunar dusk in the region. Scientists from the LRO camera team had said that they were unable to identify the Vikram lander because of the long shadows in the region during dusk.

However, when these images were released to the public on September 26, Subramaniam was one of the enthusiasts who downloaded the images and started a search for India’s lander.

Shanmuga Subramaniam is a mechanical engineer and an app developer from Chennai.

“The Lunar Reconnaissance Orbiter Camera team released the first mosaic (acquired September 17) of the site on September 26 and many people have downloaded the mosaic to search for signs of Vikram. Shanmuga Subramanian contacted the LRO project with a positive identification of debris. After receiving this tip, the LROC team confirmed the identification by comparing before and after images,” read the statement from NASA.

To confirm, the team also went through the better lit images that the orbiter had acquired during its flyover on October 14 and November 11

The debris first located by Shanmuga is about 750 meters northwest of the main crash site.