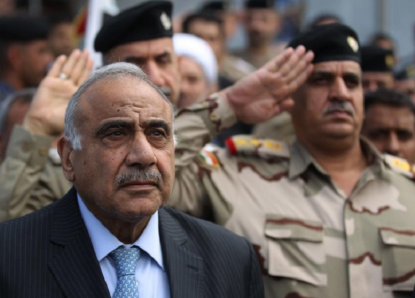 Lawmakers were expected to either vote or accept outright Abdul-Mahdi’s resignation letter in a parliamentary session Sunday, two members of parliament said.

The prime minister announced Thursday he would hand parliament his resignation on Friday amid mounting pressure from mass anti-government protests, a day after more than 40 demonstrators were killed by security forces in Baghdad and southern Iraq.

The announcement also came after Iraq’s top Shiite cleric withdrew his support for the government in a weekly sermon.

The formal resignation came after an emergency Cabinet session earlier in which ministers approved the document and the resignation of key staffers, including Abdul-Mahdi’s chief of staff.

In a pre-recorded speech, Abdul-Mahdi addressed Iraqis, saying that following parliament’s recognition of his stepping down, the Cabinet would be demoted to caretaker status, unable to pass new laws and make key decisions.

He listed his government’s accomplishments, saying it had come to power during difficult times.

“Not many people were optimistic that this government would move forward,” he said.

He said the government had managed to push through important job-creating projects and improve electricity generation.

“But unfortunately, these events took place,” he said, referring to the mass protest movement that engulfed Iraq on October 1.

“We need to be fair to our people and listen to them.”

At least 400 people have died since the leaderless uprising shook Iraq with thousands of Iraqis taking to the streets in Baghdad and the predominantly Shiite southern Iraq decrying corruption, poor services, lack of jobs and calling for an end to the post-2003 political system.

Three protesters were killed and 24 wounded in the holy city of Najaf in southern Iraq on Saturday as security forces used live rounds to disperse them from a key mosque, security and hospital officials said.

In Baghdad, at least 11 protesters were wounded near the strategic Ahrar Bridge when security forces fired live ammunition and tear gas to prevent demonstrators from removing barricades.

The protesters are occupying part of three strategic bridges – Ahrar, Sinak and Jumhuriya – in a stand-off with security forces. All three lead to the heavily fortified Green Zone, the seat of Iraq’s government.

In the southern city of Nasiriyah, security forces used live fire and tear gas to repel protesters on two main bridges, the Zaitoun and the Nasr, which lead to the city center.

Heavy fighting has taken place in Nasiriyah in recent days, with at least 31 protesters killed.

The officials spoke on condition of anonymity in line with regulations.

Abdul-Mahdi referred to the rising death toll by security forces in his speech.

“We did our best to stop the bloodshed, and at the time we made brave decisions to stop using live ammunition, but unfortunately when clashes happen there will be consequences,” he said.

Previous: Bengaluru cop stabbed by accused while taking them back to police station
Next: Bengaluru: 60-yr-old woman throws newborn grandchild from rooftop