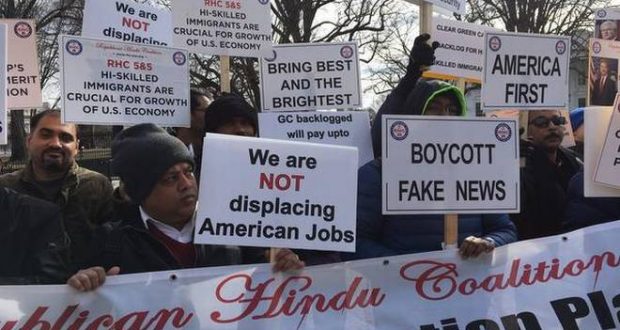 A group of mostly Indians on H1B visas held a rally outside the White House on Sunday afternoon, demanding immigration law reforms to benefit those in the country legally. The rally, organized by the Republican Hindu Coalition (RHC), which describes itself as an organization that seeks to provide a voice for the Hindu American community, involved some 200-300 people, as per The Hindu’s estimates.

Among the demands of the group was that the Green Card backlog be cleared with a period of 1-5 years. The wait time, at present, can run into decades for employment based Green Cards for Indians.

The group is also pushing for legal childhood arrivals (LCAs) to receive any benefits that individuals brought illegally to the U.S. as minors (a group often referred to as “Dreamers”) might receive. Nearly 700,000 such individuals have been protected by a Obama-era program called Deferred Action for Childhood Arrivals (DACA). The Trump administration has sought to end this program, and the issue is currently in court. The status of Dreamers, has, in parallel, also been part of the discussions to re-open parts of the federal government following the shutdown and to keep it open past February 15.

“Age 21 is a fear factor for H1B parents whose kids are on a H4,” said Jyotsna Sharma, a tech worker and TV host and one of those leading the rally on Sunday.

H1B visa holders, whose children and spouses get H4-dependent visas, are asking that H4 children be given Green Cards straight away, so they can remain in the U.S. after they turn 21 without having to switch to another visa category, such as a student visa or an H1B visa or having to self-deport.

“Their future should not be held at stake, they are the future citizens of the world , they have done everything right,” she added.

Placards at Sunday’s rally included ones that read, “DALCA [DACA for LCAs] kids deserve better”, “Stop Abusing Legal Immigrants” and “We are Not Displacing American Jobs”. One placard even said $25 billion could be raised from Green Card fees to build U.S. President’s controversial border wall.

“What we are suggesting to them [lawmakers and the Trump administration] is to include DALCA in DACA. We have nothing against DACA, that’s fine, but just because you came here legally you should not be prohibited from DACA benefits,” Shalabh Kumar, founder of RHC and donor to Mr. Trump’s 2016 presidential campaign, said.

“These are some of the brightest kids, they should not be thrown out of the country when they become 21,” Mr. Kumar said.

“Being on an H4 means, if I cannot obtain a Green Card by the time I turn 21, I will be kicked out of the country…In addition to being separated from my family, I will be made to feel like an outcast or a misfit, in a country that I grew up in for my whole life [sic],” Akshita, a high-school student, told the assembled crowd over a megaphone.

The third demand of those rallying was to remove the country caps for Green Card allotments. Currently no country may be allocated more than 7% (around 9,800) of the total number of Green Cards granted each year. India, which sends a relatively large number of skilled workers to the U.S. each year – over 70% of all H1B visas in fiscal year 2018 went to Indians – inevitably uses up all the Green Cards allocated to it.

China, Vietnam and the Philippines are other examples, though the excess demand for immigrant visas is far less in these countries. Just under 307,000 Indians (compared to some 67,000 Chinese citizens) were waiting for Green Cards in May 2018, according to US Citizenship and Information Services (USCIS) data. These numbers do not include dependent spouses and children whose Green Cards, when granted, also count against the overall cap.

In 2017, H.R. 392, a bill introduced in the 115th Congress, sought to end the per country cap. Several groups including the American Hospital Association, National Iranian American Council and Canadian Bar Association had raised objections to this, concerned that it would crowd out applications from other countries.

Nevertheless, similar bills have been introduced in the 116th Congress this year. Democratic Senator Kamala Harris and Republican Senator Mike Lee introduced the Fairness for High Skilled Immigrants Act of 2019 which will eliminate country caps for employment-based Green Cards and increase the caps from 7% to 15% for family-based Green Cards. A similar bill has been introduced by Zoe Lofgren, a Representative from California in the House of Representatives.

Not far away from the Sunday’s rally was another group – a handful of American tech workers protesting against the rally, carrying placards that read, “U.S Tech Workers, your companies think you are expensive, undeserving and expendable.” At least one of them was from an organization called Progressives for Immigration Reform, a non-profit that seeks to “educate the public on the unintended consequences of mass migration”.

The struggle for H1B workers and families may go on for a while yet. Hours before Sunday’s H1B rally, news had broken that the discussions between lawmakers and the President to avert another shutdown had broken down over disagreements over border security funding. 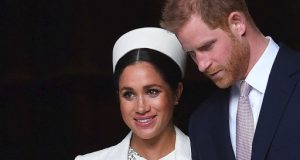 Prince Harry, Meghan to Give Up ‘Royal Highness’ Titles 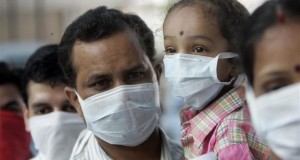 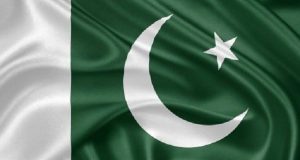 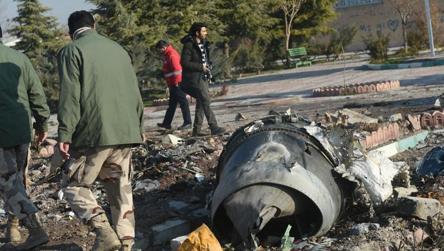 World ‘will not rest’ until answers on jet downed by Iran: Canada

Canada’s foreign minister on Thursday vowed to push Iran for answers about ...