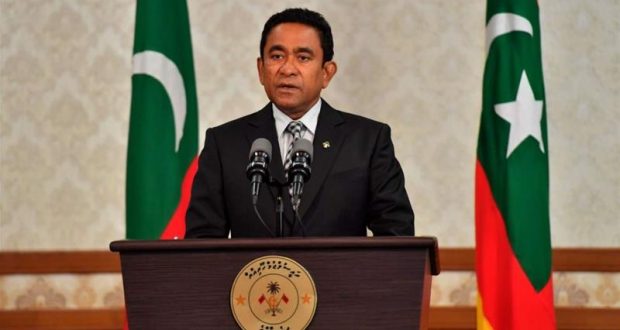 The top prosecutor in the Maldives has filed money-laundering charges against Abdulla Yameen over allegations the former president received one million dollars stolen from state coffers in the country’s biggest-ever corruption scandal.

The charges, which carry a jail sentence of up to 15 years, were filed on Wednesday, according to a spokesperson for the prosecutor general’s office.

Yameen, 59, who suffered a decisive defeat in last year’s presidential election, has denied any wrongdoing.

During his tenure, more than $79m obtained by the Maldives tourism board from leasing islands for tourism were diverted to private accounts, cashed out, and used to bribe politicians.

The case was the subject of an Al Jazeera investigation in 2016.

In secretly filmed interviews, associates of the former president said they delivered some of the stolen cash to Yameen’s residence in black bags.

“For the president, it was even difficult [to carry those bags],” said one of the three men who claimed he carried cash to Yameen.

The charges filed against Yameen on Wednesday relate to claims he received at least one million dollars through SOF Private Limited, a private company linked to his former deputy, which was used to launder tourism revenues from the state-owned Maldives Marketing and Public Relations Corporation (MMPRC).

The amount was deposited into the former president’s personal bank account at the Maldives Islamic Bank in October 2015.

The Maldives’s Anti-Corruption Commission (ACC) said last month that public funds embezzled from the MMPRC entered the bank accounts of some 155 people. The watchdog did not give details.

Mariyam Shiuna, executive director of anti-corruption group Transparency Maldives, called the charges against Yameen as “a step in the right direction in holding public officials to account”.

“However, the systemic and organised corruption uncovered in the MMPRC investigation show that many individuals were complicit in siphoning off public money,” she told Al Jazeera. “Without holding these individuals to account, there is room to argue that the prosecution of former President Yameen is targeted persecution.”

In a statement last week, the police said Yameen was told to return the amount following an ACC investigation. The former leader claimed he returned the money, but police said its investigation found he “did not return the money as ordered and instead conducted financial transactions from which he obtained profit”.

Lawyers for Yameen, in a statement last week, dismissed the charges against the former president as an attempt to influence the Maldives’s upcoming parliamentary elections, set to take place on April 6.

The ACC “has so far failed to prove the one million dollars transferred to Yameen’s account by SOF Pvt Ltd was state funds obtained through corruption”, the lawyers contended.

Yameen told reporters in January that the one million dollars deposited to his private account at the Maldives Islamic Bank was given to him by “various parties as campaign funds”. The money was his, he added, saying he did not return the amount because there was no proof it was government money.

Police have also sought charges of false testimony against Yameen and his top legal counsel.

The former president is also under investigation in a separate money-laundering case, in which he is alleged to have received 22 million rufiyaas ($1.5m) in cash days before the presidential election in September 2018.