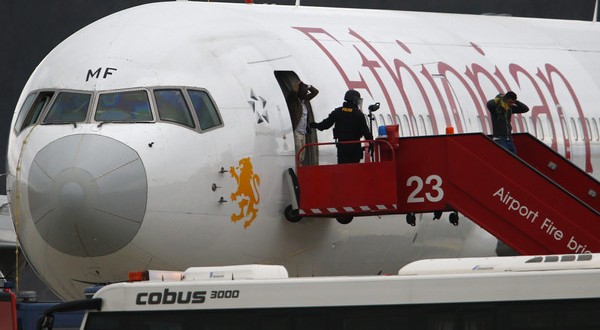 GENEVA: An Ethiopian Airlines co-pilot locked his fellow pilot out of the cockpit, hijacked a Rome-bound plane and landed Monday in Geneva, all in an attempt to seek asylum in Switzerland, officials said.
The Boeing 767-300 plane with 202 passengers and crew had taken off from the Ethiopian capital of Addis Ababa and landed in the Swiss city at about 6 a.m. (0500 GMT). Officials said no one on the flight was injured and the hijacker was taken into custody after surrendering to police.
The plane first sent a distress message while flying over Sudan’s airspace on its way to Rome, an Ethiopian official said.
“From Sudan all the way to Switzerland, the co-pilot took control of the plane,” Redwan Hussein, Ethiopia’s communications minister, said. He did not elaborate.
But passengers on the plane were unaware it had been hijacked, officials said. Even local authorities at first thought the Ethiopian plane just wanted to land in Geneva for an emergency refueling before realizing it was hijacked, Geneva police spokesman Eric Grandjean said.
Two Italian fighter jets were scrambled to accompany the plane, Geneva airport chief executive Robert Deillon told reporters.
The co-pilot, an Ethiopian man born in 1983, took control of the plane when the pilot ventured outside the cockpit, Deillon said.
“The pilot went to the toilet and he locked himself in the cockpit,” Deillon said. “(He) wanted asylum in Switzerland.”
A few minutes after landing in Geneva, the co-pilot left the cockpit using a rope, then went to the police forces close to the aircraft and “announced that he was himself the hijacker,” Grandjean said.
It was not immediately clear why the co-pilot, whose name wasn’t released, wanted asylum. However, Ethiopian Airlines is owned by Ethiopia’s government, which has faced persistent criticism over its rights record and alleged intolerance for political dissent.
Police escorted the passengers out one by one, their hands over their heads, from the taxied plane to waiting vehicles.
Geneva prosecutor Olivier Jornot said the co-pilot will be charged with taking hostages, a crime punishable by up to 20 years in prison. The Swiss federal prosecutor’s office will take over the investigation.
Jornot said the man’s chances of winning asylum were slim.
“Technically there is no connection between asylum and the fact he committed a crime to come here,” he said. “But I think his chances are not very high.”
Geneva airport was closed to other flights for about two hours after the hijacked plane landed.
Human Rights Watch says Ethiopia’s human rights record “has sharply deteriorated” over the years. The rights group says authorities severely restrict basic rights of freedom of expression, association, and assembly. The government has been accused of targeting journalists, opposition members and minority Muslims.
There have been numerous hijackings by Ethiopians, mostly fleeing unrest in the East African nation or avoiding a return.
In 1993, an Ethiopian man smuggled a pistol onto a plane and hijacked a Lufthansa flight going from Frankfurt to Addis Ababa. He demanded it be flown to the US because he was denied a visa.
In June and April 1994, Ethiopian Airlines suffered two hijackings at the hands of passengers who demanded to be flown to Europe, according to the Aviation Safety Network, which tracks aviation hijackings.
In 1995, an Ethiopian man trying to avoid being sent back home used a knife from a food tray to commandeer an Olympic Airlines jet just before it landed in Athens, Greece. Police overpowered the hijacker with no injuries to the 114 people on board, according to AP reports. Also that year, five armed men seized an Ethiopian Airlines jetliner and demanded the plane be flown to Greece and then Sweden. It was instead diverted to Al Obeid, 300 miles (480 kilometers) west of Khartoum, Sudan.
In 1996, a flight from Ethiopia to Ivory Coast via Kenya was seized by hijackers who then demanded to be flown to Australia. That flight ran out fuel and crashed off the island nation of Comoros, killing 125 people, according to the Aviation Safety Network.
In 2001, five military pilot trainees who flunked flight school reportedly wrested control of a plane during a flight from Bahr Dar, in northwestern Ethiopia, to Addis Ababa and demanded to be flown to Saudi Arabia. The plane didn’t have enough fuel so it landed in neighboring Sudan, according to AP reports.
In 2002, two passengers armed with small knives and an explosive device attempted to hijack a domestic Ethiopian flight but were shot and killed by in-flight security, the Aviation Safety Network reported.
___
Associated Press writers Frank Jordans and Geir Moulson in Berlin; Rodney Muhumuza in Kampala, Uganda; Elias Meseret in Addis Ababa, Ethiopia; and Carley Petesch in Johannesburg contributed to this report.