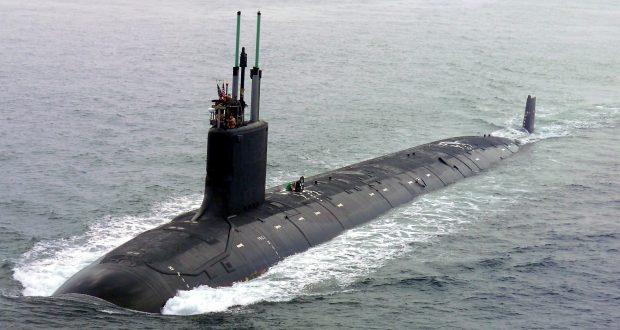 040730-N-1234E-002 Groton, Conn. (July 30, 2004) - The nationÕs newest and most advanced nuclear-powered attack submarine and the lead ship of its class, PCU Virginia (SSN 774) returns to the General Dynamics Electric Boat shipyard following the successful completion of its first voyage in open seas called "alpha" sea trials. Virginia is the NavyÕs only major combatant ready to join the fleet that was designed with the post-Cold War security environment in mind and embodies the war fighting and operational capabilities required to dominate the littorals while maintaining undersea dominance in the open ocean. Virginia and the rest of the ships of its class are designed specifically to incorporate emergent technologies that will provide new capabilities to meet new threats. Virginia will be delivered to the U.S. Navy this fall. U.S. Navy photo by General Dynamics Electric Boat (RELEASED)

Aukus: UK, US and Australia launch pact to counter China

It will let Australia build nuclear-powered submarines for the first time, using technology provided by the US.

The Aukus pact, which will also cover AI and other technologies, is one of the countries’ biggest defence partnerships in decades, analysts say.

China has condemned the agreement as “extremely irresponsible”.

China’s embassy in Washington accused the countries of a “Cold War mentality and ideological prejudice”.

The pact also created a row with France, which has now lost a deal with Australia to build 12 submarines.

The new partnership was announced in a joint virtual press conference between US President Joe Biden, UK Prime Minister Boris Johnson and his Australian counterpart Scott Morrison on Wednesday.

And while China was not mentioned directly, the three leaders referred repeatedly to regional security concerns which they said had “grown significantly”.

Speaking to the BBC, UK Defence Secretary Ben Wallace said China was “embarking on one of the biggest military spends in history”.

“It is growing its navy [and] air force at a huge rate. Obviously it is engaged in some disputed areas,” he said. “Our partners in those regions want to be able to stand their own ground.”

In recent years, Beijing has been accused of raising tensions in disputed territories such as the South China Sea.

On Thursday, UK Prime Minister Boris Johnson said the pact would “preserve security and stability around the world” and generate “hundreds of high-skilled jobs”.

He also said the relationship with France was “rock solid”.

The Aukus alliance is probably the most significant security arrangement between the three nations since World War Two, analysts say.

The pact will focus on military capability, separating it from the Five Eyes intelligence-sharing alliance which also includes New Zealand and Canada.

While Australia’s submarines is the big-ticket item, Aukus will also involve the sharing of cyber capabilities and other undersea technologies.

“This is an historic opportunity for the three nations, with like-minded allies and partners, to protect shared values and promote security and prosperity in the Indo-Pacific region,” the joint statement read.

“This really shows that all three nations are drawing a line in the sand to start and counter [China’s] aggressive moves in the Indo-Pacific,” said Guy Boekenstein from the Asia Society Australia.

Western nations have been wary of China’s infrastructure investment on Pacific islands, and have also criticised China’s trade sanctions against countries like Australia.

Australia had in the past maintained good relations with China, its biggest trading partner. But the relationship has broken down in recent years amid political tensions.

But there is tension now too with France, after Australia tore up the A$50bn (€31bn; £27bn) deal to build 12 submarines.

“We had established a relationship of trust with Australia, this trust has been betrayed,” Mr Le Drian said.

These submarines are much faster and harder to detect than conventionally powered fleets. They can stay submerged for months, shoot missiles longer distances and also carry more.

Having them stationed in Australia is critical to US influence in the region, analysts say.

The US is sharing its submarine technology for the first time in 50 years. It had previously only shared technology with the UK.

Australia will become just the seventh nation in the world to operate nuclear-powered submarines, after the US, UK, France, China, India and Russia.

Australia has reaffirmed it has no intention of obtaining nuclear weapons.

Meanwhile New Zealand said it would ban Australia’s submarines from its waters, in line with an existing policy on the presence of nuclear-powered submarines.

New Zealand, although a Five Eyes member, has been more cautious in aligning with either the US or China in the Pacific.

Prime Minister Jacinda Ardern said her nation had not been approached to join the pact. 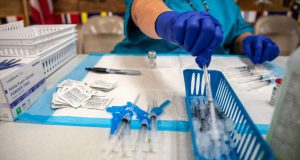 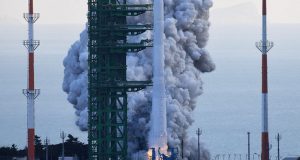 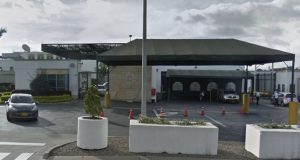