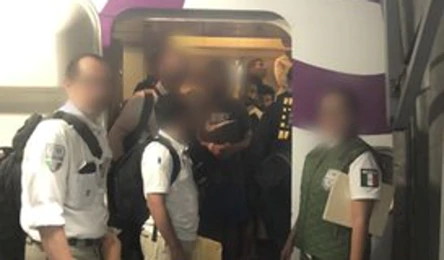 311 Indians deported by Mexico arrive in Delhi, US says message to smugglers

More than 300 Indians put on a Boeing 747-400 charter by Mexican immigration authorities for illegally entering the country to sneak into the United States landed in national capital Delhi’s airport early this morning.

The flight to deport the 311 illegal migrants – 310 men and one woman – is the first of its kind, a move that is seen to be driven by the United States that has nudged Mexico to step up efforts to check people crossing its borders.

The plane landed at the Delhi airport around 5 am. They were still inside the airport several hours later. “Government agencies are coordinating with each other to complete their arrival formalities,” people familiar with the development said.

In the first images of the flight and its passengers that had been released, some of them could be seen ready to walk out of the aircraft. In another, one person was wearing a T-shirt, shorts and slippers. Almost, nobody had any baggage to carry, understandably.

The United States was the first to react. The unprecedented repatriation of the Indian nationals is a “strong message to human smugglers”, Mark Morgan, the acting Commissioner of U.S. Customs and Border Protection, said in a tweet.

The deportation flight, he said, showed the commitment of Mexico and Instituto Nacional de Migración (INM), or National Institute of Migration of Mexico “to secure borders and orderly, legal migration”.

The INM has said there was no precedent in its history of the trans-Atlantic deportation of such a large number of people by air.

The Indian nationals did not have documentation to stay in Mexico, and their deportation was arranged after their identities were verified by Indian authorities.

The 310-odd Indians had been caught over a period of weeks and months in the Mexican states of Oaxaca, Baja California, Veracruz, Chiapas, Sonora, Mexico City, Durango and Tabasco. Many of them are said to be from Punjab.

Last year, news agency Reuters had quoted an analysis of the US Customs and Border Protection to report that the number of Indians arrested for illegally entering the United States had tripled to about 9,000 in a year. A little less than half of them had crossed into the United States through a three-mile stretch of border fence at Mexicali, the capital city of the Mexican state of Baja California.

Satnam S Chahal, president of the North American Punjabi Association, who have been tracking illegal migration from India, had last year found that there were 2,400 Indians in American jails for illegally crossing the US border to seek asylum. A significant number of them were from Punjab and claimed to have experienced “experienced violence or persecution”.