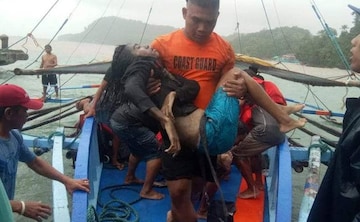 Manila: The death toll from three boats sinking surged to 25 as rescuers retrieved more bodies from the sea off the central Philippines, the officials said Sunday.

Squalls tipped over the three wooden-hulled outriggers in the Guimaras Strait on Saturday as the rest of the country was battered by rains induced by seasonal southwest monsoon winds, the coastguard said.

The bodies of 14 passengers and crew were recovered, civil defence official Franco Agudo told AFP, taking the toll to 25.

On Sunday the state-run Philippine News Agency (PNA) released a dramatic photo of rescue divers placing two corpses, one still wearing a red life vest, on top of the only parts of one boat left above water.

The Southeast Asian archipelago nation has a poor shipping safety record, with scores dying in maritime mishaps every year, usually aboard boats that move people from one small island to another.

Sea accidents historically spike during the middle of the year, when the country is frequently hit by storms and typhoons.

Previous: UP woman, her daughter crushed to death by train while chasing thief
Next: UAE President orders release of 669 prisoners for Eid