END_OF_DOCUMENT_TOKEN_TO_BE_REPLACED

Plans are on to save Nethrani islands from navy

India’s last Western Ghats archipelago – the Nethrani Islands – is now on the verge of being wiped off from the face of the earth. Thanks to our very own Indian Navy which uses the island for its target practice. ...

END_OF_DOCUMENT_TOKEN_TO_BE_REPLACED

Bhatkal – 26 March 2011: The B.Sc IInd & IIIrd year students of Anjuman College for Women, Bhatkal had visited Momin Nursery & Botanical Garden for an educational visit. As nursery management plays a vital role in the development of ...

END_OF_DOCUMENT_TOKEN_TO_BE_REPLACED 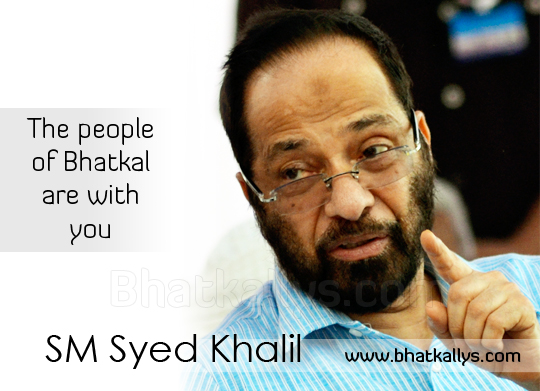 "I am deeply saddened by the words of Moulana Syed Salman Hussaini Nadvi and his take on Bhatkal's educational institutions. We should realise that religious education and world education are not two different factions. They are a single unit which can be taught in unison to benefit each other," said Syed Khalil in his address.

Continuing with his speech, he said, "If our income is Haraam, why has it been used for the development of Jamia Islamia ...."

Before Syed Khalil could complete his speech, Moulana Abdul Aleem got up and walked towards Syed Khalil to object. Soon after, Moulana Ilyas Nadvi joined as he said, "he bilkul galat zapni tumchi (this talk of yours is not right)," and diverted his attention from the microphone as a crowd of protesters gathered around the stage.

Considering the sentiments of the organisers, a group of students and graduates from Jamia joined in the protest against Qaide Qaum Khalil as they shouted slogans and disrespectful words before clamoring near the stage.

A short while later, Syed Khalil returned to the stage to clarify his remarks. Without being given a fair chance to speak, he had to express an apology and return to his seat. The drama was telecast live on local television as Bhatkalli families watched the series of events unfold before the broadcast was taken off air abruptly.

The chain of events has undoubtedly sowed a seed of contempt in the hearts of people. Ruffling the feathers of communal harmony, remarks and words of support have continued to pour in for Syed Khalil.

Salman Ahmed Jubapu from Al Hasa, Saudi Arabia writes to, "The organisers should explain the fiasco created by snatching and chanting slogans against our leader Syed Khalil and forcing him to leave the stage. The final day of the convention was really disappointing as it was conducted against the concept of promoting education and entirely contrast to the atmosphere required for its development by society.

"The total miscalculation of the eminent scholar to recognise the Islamic identity of our town and our deep rooted love for Islam is beyond my comprehension since he is a kind of person who has travelled extensively to each and every corner of the world and countless number of times to Bhatkal. There is much more to write about this issue but let's give reconciliation a chance and work for the betterment of society keeping up the spirit of Anjuman."

Echoing similar views, Mohammed Farooque Shabandri from Saudi Arabia said, "I would like to highlight the role of Anjuman alumni who maintained their ethics during the chaos unlike Jamia students who resorted to protests and violence. Syed Khalil was invited as a guest and being the president of Anjuman, taking away the microphone is an insult. To me the qayed qoum wanted to clarify the controversy and he was denied the chance."

S.M. Syed Maqbool from Dubai sent his comments as he said, "I fail to understand why festive, joyful occasion of Jamia's Golden Jubilee was used to target our most prestigious institution, Anjuman. Moulana Salman Nadvi should have been alerted after his first inflammatory outburst against the Anjuman. Office bearers of Anjuman should have been given chance to counter it. But alas, outburst became stronger and toxic with each speech. The forces behind the move should be exposed, and should not be allowed to hijack similar functions in the future. It was imperative on Janab Syed Khalil Saheb give his views on the subject and close the chapter. But Qaid-e-quom was not allowed to complete his clarification and his microphone was snatched. This shows how intolerant we have become and how disrespectful of our Qaid."

In a copy of an e-mail sent to Syed Khalil, Shadab Aliakbara shared his support as he said, "As a child I was told by my parents to grow up and become like C.A. Khalil. Your hard work, struggles and innumerable services to the community and its institutions have served the purpose of development."

He added, "Regarding the Jamia episode, I personally commend Syed Khalil for his comments as it was necessary. No Moulana of any calibre can come on the podium and talk nonsense about our prestigious institutions without proper knowledge which have been the backbone of our community and have produced such great personalities.

He also said, "It was naive of Moulana Salman Nadvi to get incorrect information as he cared less about what he was saying. We have been giving unnecessary importance to religious bigots and take their words so seriously that even to ponder what they say is some kind of sin lest to protest. This incident wouldn't have been blown out of proportion if you were given a fair chance to speak and complete your comments. We need dynamic leaders like Khalil to guide and help us. We are fully in support of you and we stand by you. We always will. I pray for your well being and prosperity."

Hundreds of emails are pouring in from different parts of the world where the Bhatkali community reside in support of Syed Khalil stating that he need not be scared of such people and the community will back him to the hilt.

Syed Raqeem S.M remarked in an e-mail saying, "I as an alumni of Anjuman Protest via email the action taken against our Qayed qoum Syed Khalil and the golden convention of Jamia Islamia will always be remembered with a black mark in the pages of history. Much of the Anjuman Alumni has reserved their protest but due to respect of Jamia. But their silence will speak louder than their voice."

Mohammed Ilyas Jubapu wrote, "Khaleel Baho, don't be disheartened by the developments and keep moving forward. We are all with you and Allah knows the intentions. The tone of Moulana's speech betrays some incomprehension of Anjuman's intentions, and an inadvertent (am sure) distortion of the facts. Let me politely, calmly and convincingly reiterate our 'firm & clear' position that , we strongly condemn what is being portrayed of Anjuman."

S.M Siraj said, "Islam teaches us to respect elders but the so called true believers have acted completely opposite to the teachings by acting violently against our revered elder and an honored personality. I strongly disapprove the disgustful language used by Moulana in his rhetoric calling people studied in the modern and secular institutions as "Waladul Haram and Bintul Haram", we demand his immediate clarification. An overwhelming majority of our community members are products of one or the other institution's of Anjuman which means all these people are. How can Moulana use such disgustful words in spite of having well informed of character of our community in general (I feel so) and our educational institutions in particular."

Arshad Hassan Kadli has written to Bhatkallys.com saying, "It is the need of the hour for Jamia to issue a written clarification on the subject since it involves sentiment of thousands of graduates from Anjuman in general and Engineering College in particular. I being one amongst them."

Abdul Rahman Siddiqui from Dubai writes, "Moulvi Slaman Nadwi is an eminent Islamic scholar, let us give him benefit of doubt that he may have been mislead ed. We will adopt policy of forgiveness. Jamia Islamia is very dear to us. Our act must not directly or indirectly harm Jamia."

He added, "I truly feel sad and sorry the way our leader was humiliated at last session. I know Syed Khalil has great golden heart. He will forgive and forget the incident. Jamia Nazim and Mohtanmim have requested forgiveness and to move forward. We should leave Khalil and concerned people to handle the situation as they think fit. General public should show restraint and avoid public comments which may harm reputation of Jamia. I request Syed Khalil saheb to issue a statement, perhaps in our community media which could help the situation."

END_OF_DOCUMENT_TOKEN_TO_BE_REPLACED

Bhatkal – 23 March 2011: According to the press release issued by Anjuman Engineering College Principal Dr Noor Ahmed, 2 students of Electronics and Communication department have been given job offers by Software firm from Bangalore at a recently concluded ...

END_OF_DOCUMENT_TOKEN_TO_BE_REPLACED

Bhatkal – 22 March 2011: Superintendent of Police of Uttara Kannada district Raman Gupta, is among the 24 IPS officers, who received transfer orders on Monday by the Karnataka state government, in a major reshuffle of police set-up. Mr Raman ...

END_OF_DOCUMENT_TOKEN_TO_BE_REPLACED

Bhatkal – 22 March 2011: Bhatkal Electricity department is cutting down all the trees alongside NH-17 including the big tree infront of Noor Masjid to protect road from damage. Due to this, the electricity supply will be disrupted for 3 ...

END_OF_DOCUMENT_TOKEN_TO_BE_REPLACED

Bhatkal – 21 Marh 2011: A slow bike competition organized by BAS Motors in association with Bhatkal Rotary Club saw huge turnout. Around 60 motorists participated in the competition which was held at Police Grounds. Prior to this competition a ...

END_OF_DOCUMENT_TOKEN_TO_BE_REPLACED

Bhatkal – 20 March 2011: According to the press release issued by Bhatkal Tahsildar, people are requested to verify their census details by visiting the village accountant’s office and request for correction if they find any data is missing or ...

END_OF_DOCUMENT_TOKEN_TO_BE_REPLACED

Bhatkal – 19 March 2011: The weekly Sante Market which is being held every Sunday is postponed to Tuesday in the view of Holy festival. According to the press release issued by Additional DC, this decision was taken keeping in ...