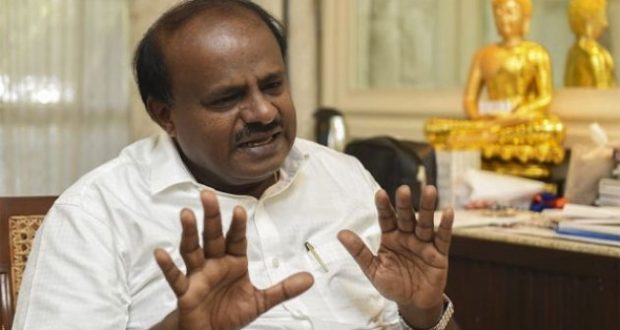 Bengaluru: The issue of seat sharing between Congress and JDS for the upcoming Lok Sabha elections has yet again brought to fore the internal rift that exists between the coalition partners in Karnataka.

On Tuesday, chief minister Kumaraswamy expressed his anger by saying “We (JD-S) are not beggars to take three, five or seven seats.’’ His outburst came in response to a query from reporters on the Congress offering seven out of 28 Lok Sabha seats to his party.

Reacting to Kumaraswamy’s remarks, coordination committee chairman Siddaramaiah said, “No one needs to beg from anyone. This is a coalition government and neither JD(S) nor the Congress is a beggar.’’

Further, he mentioned that while the seat sharing was yet to be finalised, the Congress party leaders have arrived at a consensus that they should not concede the 10 seats that they have won in hard-fought contests. “Everything is still open to discussion,” he added

Speaking to reporters after a party meeting held on Monday, KPCC President Dinesh Gundu Rao said that they have not yet taken a decision on seat sharing and candidates. “Discussions will be held with JD(S) supremo H D Deve Gowda on Wednesday regarding this issue,” he said.

The JDS have demanded 10 out of the 28 Lok Sabha seats as against their earlier demand for 12 seats. The strategy that the coalition partners are working on is to jointly put up candidates to avoid splitting of votes between the partners. In the past elections, Congress and JD(S) put up candidates against each other and, on many occasions, they feared that a split of the ‘secular’ vote will help the BJP.

The current Lok Sabha strength of the JD(S) is two while Congress has 10 seats. The BJP has 16 seats.

Previous: Iran says suicide bomber in attack on military was a Pakistani national
Next: Defence minister flags off Aero India, invites investors in aerospace and other sectors