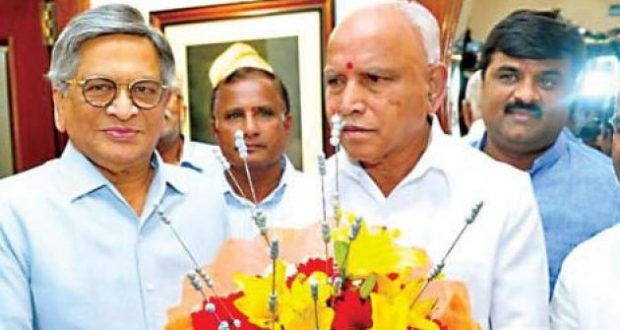 BJP state president B.S. Yeddyurappa had been to meet SM Krishna at his home to discuss the party’s strategy for this Lok Sabha poll. Reportedly Krishna advised Yeddyurappa that instead of fielding a candidate from the Mandya Lok Sabha seat support Sumalatha Ambarish, who may contest as an independent.

It is gathered that Yeddyurappa is said to have assured Krishna that he would take a decision in the matter after discussing it with the party’s central leadership.

Addressing presspersons after meeting Krishna, Yeddyurappa said he had agreed to campaign for the party’s candidates in Bengaluru North, Central, South and Rural, Hassan, Kolar, Tumakuru, Chikkaballapura, Shivamogga, and Udupi- Chikamagaluru and also discussed the present political situation in the state, including Mandya and the probable candidates for the 28 Lok Sabha constituencies.