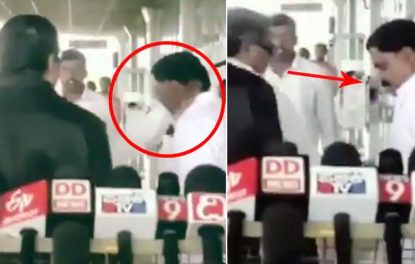 Bengaluru: Former chief minister Siddaramaiah after he was caught on camera slapping a party worker clarified that it was just an expression of affection and the incident was blown out of proportion.

“Nadanahalli Ravi is like my son. I have been his guide for long time and there are many such followers with me. There will always be instances of me expressing affection and dissatisfaction out of concern. Today’s incident is one such thing but was blown out of proportion,” tweeted Siddaramaiah.

Siddaramaiah on Wednesday, September 4 slapped a his aide, Nadanahalli Ravi, a former gram panchayat member outside the Mysuru airport for trying to make the Congress leader talk on the phone.

In a video doing the rounds on social media, a visibly irritated Siddaramaiah listens to the man for a brief while and slaps him in the face.