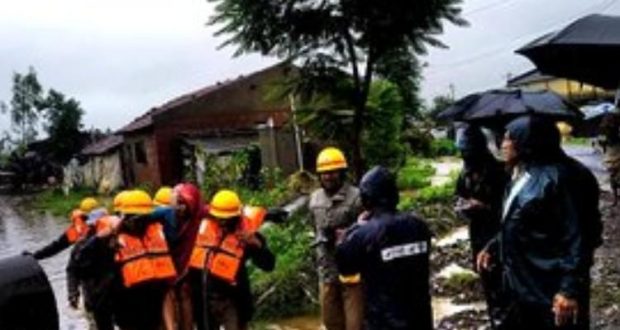 No cabinet or district ministers in flood-hit Karnataka: Bureaucrats hold the fort

Incessant rains in the past week has caused floods and prompted rescue operations in parts of coastal, Malnad and northern Karnataka.

At least 10 districts – Dakshina Kannada, Uttara Kannada, Udupi, Belagavi, Raichur, Dharwad, Shivamogga, Chikkamagaluru, Kodagu and Chamarajanagar – are facing a spell of moderate to heavy rainfall with high speed winds. Thousands have been moved to relief camps in many of these districts.
Rescue and relief efforts are currently underway without a cabinet or district-in-charge ministers in place and are being coordinated solely by bureaucrats. In fact, six constituencies which are hit by heavy rains – Kagwad, Athani, Gokak, Yellapur, Hirekerur and Ranebennur – do not have MLAs in place after the elected representatives resigned last month.Three of the constituencies are in Belagavi, where more than 8,000 have been evacuated from their homes following rains. Shrimant Patil, Mahesh Kumathalli and Ramesh Jarkiholi who represented Kagwad, Athani and Gokak respectively are no longer MLAs.
In Yellapur, where incessant rains have left roads and paddy fields waterlogged, Shivaram Hebbar resigned as MLA last month. There is a similar situation in Haveri’s Hirekerur and Ranebennur, where BC Patil and independent MLA R Shankar too resigned.
Chief Minister BS Yediyurappa held a video conference with Deputy Commissioners (DC) and conducted an aerial survey of the rain-hit areas before flying to New Delhi to discuss the expansion of the Karnataka cabinet. Since then, the disaster relief operations in the state have been managed by Gangaram Baderiya, Principal Secretary, Disaster Management who is receiving daily updates from the DC’s of affected districts.
The DC’s chair the District Disaster Management Authority (DDMA) and are the nominal heads of the rescue and relief efforts. The DC’s report to the Chief Secretary and Principal Secretary, Disaster Management everyday with updates.
However, the absence of a cabinet and district ministers has affected the flood relief efforts, according to some observers.
In Udupi, electricity poles and trees were uprooted after heavy rainfall on Tuesday and former minister and Congress leader Pramod Madhwaraj believes that the absence of a District Minister-In-Charge is being felt in the district.
“An absence of a district minister is felt during calamities like this. If District Minister in charge was in place, they could have done much better. Officials in charge will have to go by the rules and there is a delay in giving immediate relief to the people. In such a situation, lot of places electricity has been cut off and re-installation is taking place at a slow pace,” he argues.
The Chief Minister’s decision to camp in New Delhi has also come under criticism with former minister for Rural Development & Panchayat Raj Krishna Byre Gowda questioning the lack of a cabinet 12 days after the government was formed.
Another Congress leader HK Patil wrote to Yediyurappa asking him to turn his attention to the flood situation in the state.
Source: The News Minute
2019-08-07
Fristen Dias

Previous: Facebook sues two app developers for click fraud
Next: ’Come and collect your Re 1 fee’: Swaraj told Harish Salve moments before she was rushed to AIIMS