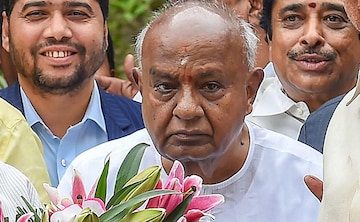 PM Modi has given people the reason to doubt him, says JD(S) leader Deve Gowda. (File)

With Deve Gowda reportedly not accepting his resignation, the present incumbent A H Vishwanath had threatened that he would resign from the Karnataka assembly if he was not relieved from his responsibility.

“We will appoint the new JD(S) state president in three days,” Gowda told reporters in Bengaluru, days after Vishwanath resigned apparently peeved at the way the Congress and JD(S) coalition government was functioning in Karnataka.

To a question whether he has accepted Vishwanath’s resignation, Deve Gowda said, “I will get the new person appointed by him (A H Vishwanath) only.

Why will I accept his resignation? He only has to hand over (charge) to the person.”

Asked about Vishwanath recommending chief minister H D Kumaraswamys name for the post of state president, Deve Gowda said “There is nothing wrong in it.

However, we have a policy of One man one post. Didnt I resign and make C M Ibrahim the party president soon after becoming the chief minister?”

In his resignation letter to Deve Gowda, Vishwanath had pointed out the lack of trust between the coalition partners, which, he said, resulted in the rout of both the parties in the recent Lok Sabha election.

Vishwanath was also aggrieved that he and the Congress state president Dinesh Gundu Rao were not part of the coordination committee headed by former chief minister Siddaramaiah.

Previous: Indian nurse in UAE for 10 years wins house
Next: Around 10 dogs found killed by poison-laced fish in Udupi