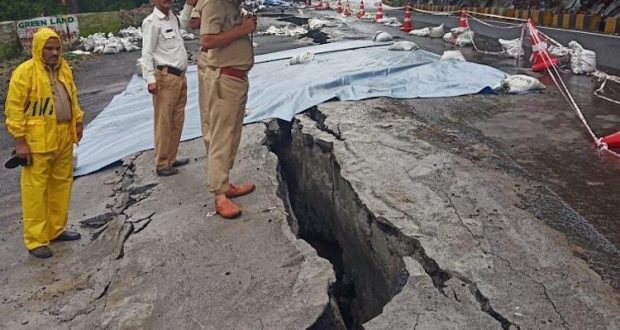 Major crack on NH-4 due to rains, bus services from Karnataka to Pune, Mumbai halted

A major crack on the road halted traffic on National Highway 48 (formerly NH 4) on the Karnataka-Maharashtra border. The crack developed on Monday night after heavy rainfall in Belagavi and its neighbouring districts in northern Karnataka.

Pictures of the cracked road were circulated on social media. The photographs are from near Kagal village in Maharashtra, around 8 km from Koganolli, the last village in Belagavi district before the border with Maharashtra. The roads leading to Kaagal were blocked on Tuesday and officials from Kohlapur district of Maharashtra are currently carrying out repair works.

“We received information from our Belagavi division about the crack developed on the road on NH48. Buses headed towards Pune and Mumbai are operating only up to Belagavi now,” confirmed an official of the Karnataka State Road Transport Corporation (KSRTC).

The official also confirmed that due to waterlogging, the national highway connecting Bengaluru and Pune is now shut and vehicles leaving Belagavi are only able to travel till Kakati, around 10 km north of the city.

All buses bound for Mumbai, Kolhapur and Shirdi from Karnataka have also been stopped, while the road between Ankola and Yellapur in Uttara Kannada district is also blocked due to inundation.

As a result of the torrential rain and consequent water flowing below the track, the South Western Railway – Hubballi Division has informed that both up and down lines between Londa and Tinaighat are suspended from 1 am of August 6 till further advice.

Divisional Engineer of Hubballi Division visited the spot and advised train traffic to be suspended for the safety of passengers.

The following trains have been rescheduled / short terminated / partially cancelled:

4. Train No. 12780 Hazrat Nizamuddin-Vasco da gama arriving on 06.08.2019 will be short terminated at Belagavi. Slip coaches will be moved separately to Hubballi.

5. Train No.02779 Vasco da gama-KSR Bengaluru Express commencing journey on 06.08.2019 will originate from Londa instead of Vasco da gama partially cancelling the service between Vasco da gama and Londa.