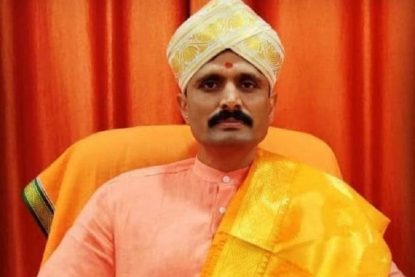 Raichur: A case has been registered against Sri Ram Sena (SRS) working president Siddalinga Swami for provocative statement made by him at an event held in Raichur recently.

Siddalinga Swami of Andola Karuneshwar Mutt threatened those speaking against PM Modi and Amit Shah saying the fate of murdered Kannada journalist Gauri Lankesh also awaits them. A video of the incident has gone viral on social media.

“Even 14-15 year olds are talking about Modi and Amit Shah. They will likely meet the same fate as Gauri Lankesh in the future,” he allegedly said.

Notably SRS founder Pramod Muthatlik shared the dais with the Swamiji at the event on February 2.

In yet another controversial statement made in Gadag on occasion of birth anniversary of Chhatrapati Shivaji Maharaj, the Swami was heard announcing cash reward each for those who would chop off tongues of Kashmiri students, who have been charged with sedition for raising Pakistan Zindabad slogans.

Previous: USIBC appoints Vijay Advani as new Chair of Global Board
Next: War against terrorism to be consolidated: Pak Army chief Bajwa