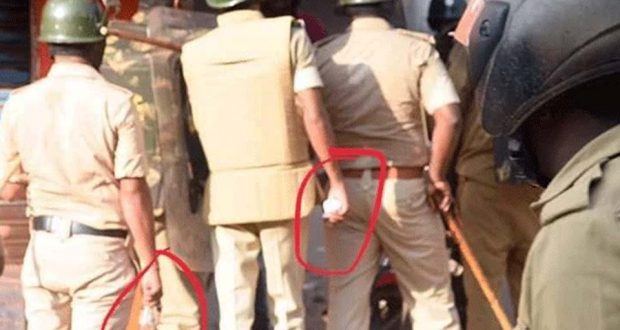 Bengaluru: Former Karnataka Chief Minister and JD(S) Karnataka President HD Kumaraswamy on Friday released a 25 minutes’ video showing visuals of how things panned out on December 19 in Mangaluru when the anti-CAA, NRC Protest turned violent in the city and claimed two lives as a result of police action.

Kumaraswamy, during a press meet held in JP Bhavan in Bengaluru, claimed that the video footage raised suspicion over the possible involvement of the police in the violence.

“Who empowered the Mangaluru police to open fire on protesters? The government and the police were wrong in doing so” said Kumaraswamy, who released 35 video clips (in a compact disc) of the police firing.

Slamming Chief Minister B.S. Yediyurappa, Kumaraswamy reminded that Yediyurappa had become the chief minister to resolve problems of the people of Karnataka and not to please “his bosses in Delhi”. Kumaraswamy alleged innocent persons were also lathi-charged by the police during the clashes and that it was violation of human rights.

“Both the CM and police commissioner have different versions of the circumstances that led to the firing. The CM claimed police station was being attacked. But the police claimed the protesters were near a shop. The police station has the 360-degree camera. Has the camera not captured the alleged attack on the police station by protesters?” asked Kumaraswamy, also ridiculing the government for withholding the compensation announced for the victim’s families.

The BJP came down heavily on Kumaraswamy, alleging he was trying to disturb peace by making baseless allegations. “The incident is being investigated and the videos of the attack on the police station and the violence… stone-pelting by miscreants, attack on police armoury and damaging CCTVs is all in the public domain. Kumaraswamy is trying to protect KFD and PFI members,” said BJP MLA Harish Poonja.