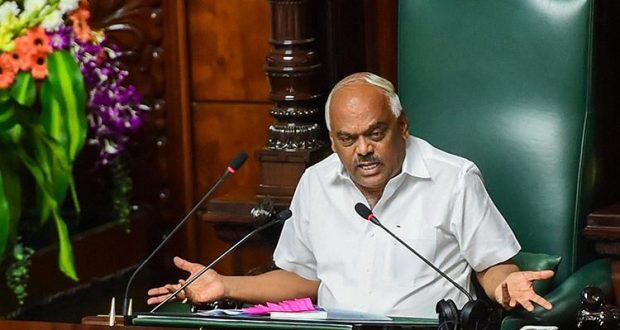 Karnataka Speaker asks rebel MLAs to appear before him on Tuesday

In what seems to be strategy to bring 15 rebel MLAs who have been staying in Mumbai since July 6 to Bengaluru, Karnataka Speaker KR Ramesh Kumar asked all rebel MLAs who petitioned the Supreme Court to appear before him on Tuesday.

The rebel MLAs have now been asked to appear before the Speaker at 11 am on Tuesday morning The Congress party filed a petition on 11 July seeking the disqualification of rebel MLAs who had submitted their resignations and left to stay in a hotel in Mumbai.

The letter from the Speaker says failure to comment or reply to the letter in three days time will mean that the Speaker will be forced to proceed further on the petition filed by Congress Legislature Party (CLP) leader Siddaramaiah seeking the disqualification of the rebel MLAs. The threat of disqualification may force a few MLAs to come back to the state, the Congress believes.

Meanwhile, the Speaker added that notice has been given to the MLAs to determine if their resignations are genuine. “Decision is made on the floor of the house. We will conclude it tomorrow. Notice has been given to conduct an enquiry into the resignations to determine they are as per format and genuine. I had asked MLAs to appear earlier but they are yet to come,” said Speaker KR Ramesh Kumar.

He further refused to confirm whether the anticipated floor test in the Assembly will be conducted on Monday. “It is in the agenda of the Assembly. It is not a dictatorial decision by me and now Congress leaders have moved a petition,” added the Speaker.