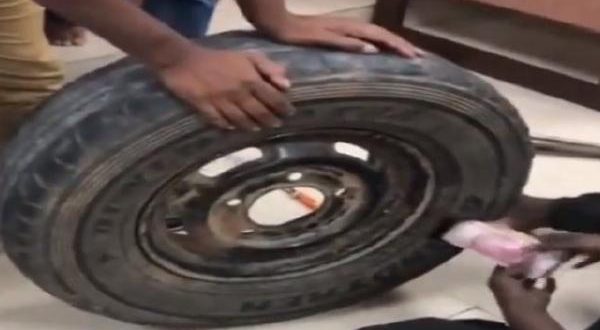 With the Lok Sabha 2019 elections underway, the Income Tax (IT) department is in the process of seizing large amounts of cash being transported allegedly by political entities. In fact, reports lead us to believe that sleuths seized around Rs 4.5 crore in cash from raids in Karnataka, and Goa on Saturday.

One of the most interesting seizures was made from a vehicle travelling from Karnataka’s state capital Bengaluru to Shivamogga and Bhadravati. A video has surfaced of IT officials pulling out wads of cash from the stepney of the vehicle amounting to a whopping Rs 2.3 crore. The video is being widely circulated on social media and only highlights the concerns of political analysts who have pointed out how these general elections are being fought merely on the basis of monetary dominance.

In addition, officials with the IT department also recovered Rs 1 crore in cash from the residence of a banker in Bagalkot, Karnataka. Another Rs 60 lakh in cash was seized from the home of a jewellery shop owner in Bhadrawati earlier today. Raids are also underway in the state of Goa where Rs 30 lakh have been recovered from a residence and more raids are likely to reveal shocking details about the circulation of illicit money during the Lok Sabha elections.

#WATCH: Rs 2.30 cr in cash stuffed inside the spare tire in a car seized by Income-Tax officials. The cash was being transported from Bengaluru to Shivamogga. #Karnataka pic.twitter.com/yUeRdKVyzY

Earlier this week, data released by the Election Commission of India had revealed that sleuths had seized cash and contraband amounting to over Rs 2,600 crores until April 17 of this year. The figure came as a shocker since the value of cash and contraband, including gold and liquor, during the 2014 Lok Sabha elections was estimated at Rs 1,200 crore. However, the value of seizures amounting to over double of that from the last general elections at a time when only two out of seven phases of voting have concluded is not only worrying but casts a shadow on the very idea of free and fair elections in the world’s largest parliamentary democracy.

Previous: From ‘12345’ to ‘blink182’, the most hacked passwords revealed in warning over cyber-security
Next: Chikkamagaluru: Oil tanker rams into bridge, driver killed