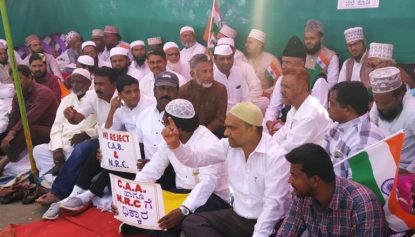 Hubli: A hunger strike opposing the Citizenship Amendment Act (CAA) and National Register of Citizens (NRC) was organized in the city by the leaders of the Muslim community, Dalit organisations, Congress Party.

During the protest the protestors raised slogans against Prime Minister Narendra Modi and Union Home Minister Amit Shah, they demanded the withdrawal of the CAA and not to implement NRC.

AICC member Shakir Sanadi said, “India is witnessing such a dictatorship for the first time. The BJP government is trying to divide people into the lines of religion, through CAA and NRC. This move is a threat to peace and harmony in the country”