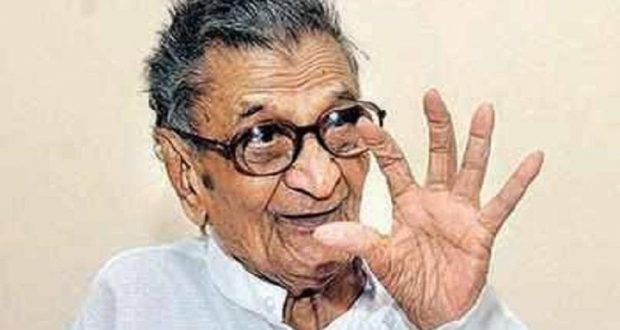 Centenarian freedom fighter, vedic scholar and a former journalist who had witnessed the Jallianwala Bagh massacre, Sudhakar Krishna Rao died on Thursday in Bengaluru. Known as Pandit Sudhakar “Chaturvedi” as he was well versed in the four vedas, the scholar died at his home in Bengaluru’s Jayanagar, media reports stated.

His last rites will be performed after 4 pm in Bengaluru’s Chamarajpet cemetery, Kannada Prabha reported.

Sudhakar Krishna Rao was born on Rama Navami in Tumakuru’s Khyatasandra. Unverified reports say that he was born in 1897. When he was in school, Sudhakar Chaturvedi moved to Haridwar under the guidance of his father to join the Arya Samaj. Known as “postman to Gandhi,” several reports claimed that Gandhi fondly called him “Karnataki”.

Sudhakar Chaturvedi was deeply influenced by the Vedas and the teachings of Swami Shraddhanand. In his youth, he joined a newspaper named Vijay, which was run by Swami Shraddhanand, TOI reported in 2019. The newspaper focused on covering the freedom movement in the country. Sudhakar Chaturvedi is believed to have been deployed for reporting at Amritsar when he witnessed the Jallianwala Bagh massacre on April 13, 1919, which killed 379 Indians. His eyewitness account of the massacre is documented in the Kannada book by N Nagalaxmi, titled Shataayushi Pandita Sudhakara Chaturvedi.

Chaturvedi recounted to TOI that Colonel Reginald Dyer announced that if the gathering did not disperse, they would open fire. “As Bachat Singh, the Congress leader from Lahore, who was in-charge for the day climbed up a wall and attempted to address the large gathering, the firing began within three minutes,” TOI quoted him as saying.

Sudhakar Chaturvedi then hid in a drain and witnessed people crying and trying to climb the walls of the Bagh. In the book by Nagalaxmi, Sudhakar had recounted that he had helped cremate the unclaimed bodies of the dead after the massacre, the report added.

He was residing in the Sabarmati Ashram with Mahatma Gandhi when he was jailed for part taking in the Khilafat Movement, the Kannada Prabha report added.

Condoling his death, Chief Minister BS Yediyurappa said, “I am deeply saddened by the demise of freedom fighter and vedic scholar Pandit Sudhakar Chaturvedi. He witnessed the Jallianwala Bagh massacre and fought along with Mahatma Gandhi during the freedom struggle. He has also comiled over 50 books about the Vedas. May his soul rest in peace.”

Congress MLA from Jayanagar, Sowmya Reddy offered her condolences following news of his demise. “I extend my deepest condolences to his entire group of friends and family. He will forever be remembered. I pray to God to rest his soul in peace.With utmost pride I would also like to share the fact that he hailed from Namma Bengaluru, a resident of Jayanagar,” she said in a tweet.