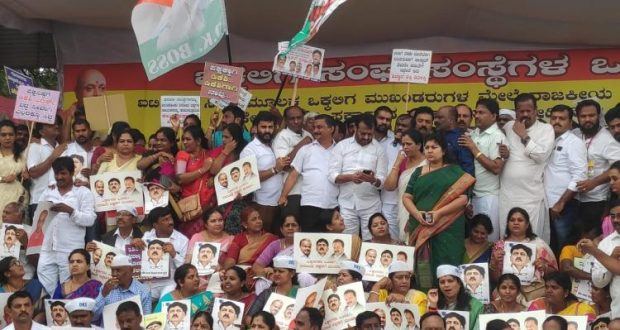 Following the massive rally organised by members of the Vokkaliga community protesting the arrest of Congress leader DK Shivakumar, BJP leaders in the state questioned the attempts to give a ‘caste angle’ to the protest.

MP Shobha Karandlaje said that the issue should not be misconstrued as casteist and that the law is the same for everyone.

“Investigation agencies have given enough time to correct and prove himself but he failed and for his personal misdeeds, he is being questioned now. One shouldn’t misuse caste or religion to save themselves from unlawful activities. The law is the same for all and will take its own course of action,” she said in a tweet.

Tourism and Kannada Culture Minister CT Ravi asked the community to introspect the decision to come out in support of DK Shivakumar.

“Did the BJP start the ED? Does ED differentiate between castes? If you are honest and not done anything wrong, won’t you be cleared by the courts? Those supporting a corrupt (person) on the basis of his community must introspect their decision,” he said on Twitter.

Ravi, a Vokkaliga leader himself, urged people of the community to idolise stalwarts like Shantaveri Gopala Gowda, Kengal Hanumanthaiya, and Kuvempu, instead.

The protest organised by Vokkaligara Sangha members and supported by Congress also saw Vokkaliga seers speak out in support of Shivakumar.

“This [numbers in the rally in Bengaluru] is only a sample and symbolic. If the community is hurt, more people will descend on Bengaluru. If we seers call for a protest, there will be no place in Bengaluru. Now only community representatives are here and not the entire community,” Nanjavadhoota Swami, a religious head of Vokkaligas, said, as per The Hindu. His statements were seen as a veiled warning to the BJP.