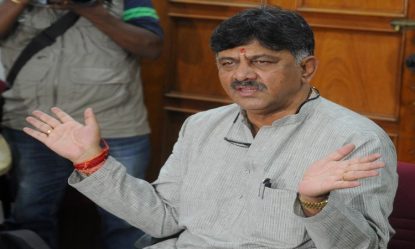 Bengaluru: “The people of Kanakapura have been peace-lover since centuries and believe in religious harmony. They have lived and will always without any bigotry,” said former minister D K Shivakumar.

In a press release, DK Shivakumar said that communal harmony in the whole country is in danger. People of Kanakapura must not fall prey to it.

He further claimed, in the release, that in the name of the event the organisers want to instigate riots and violence in the region. Hence, he implored people should not allow themselves to be carried away in any frenzy.

His release comes as a reaction to the ‘Kanapura Chalo’ organised by Hindu Jagran Vedike on January 13 to protest against the construction of a 114-feet Jesus statue on Kapalabetta at Kanakapura.