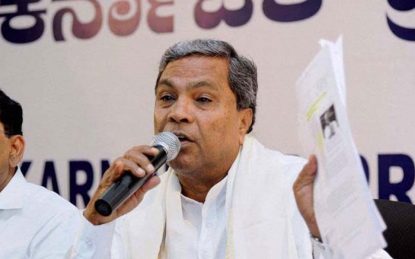 Bengaluru: The Congress on Saturday demanded dismissal of the BJP government in Karnataka following leak of an audio clipping in which Chief Minister B S Yediyurappa purportedly can be heard mentioning the disqualification of rebel Congress-JDS MLAs and alleged involvement of the saffron party’s central leadership.

The BJP, however, said the chief minister was quoted “out of context.”

The row erupted just as the BJP government has completed 100 days in office after it was sworn in on July 26 following the collapse of the Congress-JDS government with the defeat of the motion of confidence moved by the then chief minister H D Kumaraswamy in the assembly by 99-105 votes.

In the clipping that has gone viral, Yediyurappa reportedly is heard saying the dissident Congress-JD(S) MLAs, who were later disqualified, were kept in Mumbai during the final days of the coalition government under the watch of BJP president Amit Shah.

The Congress also urged the President of India to remove Home minister Amit Shah from the Union Cabinet based on the clipping.

“We met the governor and demanded that the Yediyurappa government be dismissed.

We have petitioned that the same should be conveyed to the President of India and Amit Shah should be dismissed from the cabinet,” Siddaramaiah told reporters after meeting Vala.

Siddaramaiah claimed in the clipping aired by news channels Yediyurappa has stated that Amit Shah had kept all the disqualified MLAs in Mumbai and engineered the defection.

“The clipping makes it very clear that BJP indulged in anti-constitutional activities. Home Minister Amit Shah was behind pulling down the government unconstitutionally, hoarding the MLAs in Mumbai by luring them.

Yediyurappa also purportedly can be heard expressing anguish at a recent party meeting in Hubballi over some leaders’ opposition to giving tickets to disqualified Congress-JD(S) MLAs for the December 5 bypolls to 15 assembly constituencies.

In the audio tape, he also reportedly hits out at party leaders for lack of support in “saving” the BJP government and not recognising the “sacrifice” of the disqualified MLAs, because of whom they could come to power.

Reacting to the row, the BJP said the Chief Minister was quoted out of context.

“Nobody knows in what context the chief minister had said. He has been quoted out of context,” BJP spokesperson Go Madhusudan told PTI.

Such statements hold no good in any court of law as evidence, the BJP leader added.

Wading into the controversy, JDS leader and former chief minister Kumaraswamy said the BJP as a party stood exposed by the clipping as Yediyurappa himself has “revealed the truth.”