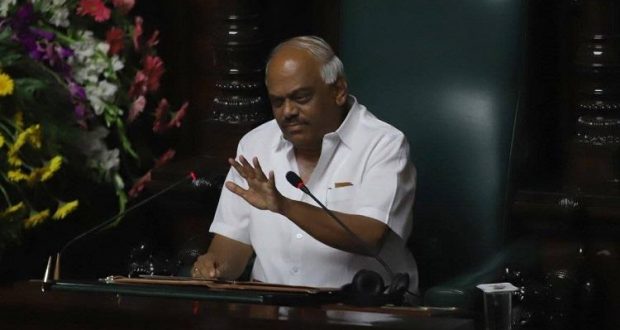 “My story has become like that of a rape victim,” Speaker Ramesh Kumar declared in the Karnataka Assembly on Tuesday, “The rape has happened only once. If the rape victim had been quiet, it would have gone away.” And then, he plumbed the depths of insensitivity to ‘joke’ about how he was persecuted, claiming his plight was similar to that of a rape survivor.

Ramesh Kumar was speaking in the context of the latest audio tape-gate in Karnataka, where the state’s Chief Minister released clips of BJP leader Yeddyurappa allegedly trying to bribe a JD(S) MLA’s son, to make his father jump ship, in order to bring down the government. In the tape, Yeddyurappa (who has since accepted that he did meet the JD(S) worker, Sharanagouda) claims that the BJP has ‘booked’ the Speaker himself for Rs 50 crore.

In an attempt to compare his name cropping up in the tape to a violent crime like rape, Ramesh Kumar said in the Assembly, “…because the rape happened, a complaint was filed and so the police arrested the accused and sent him to jail. The defense lawyers who are on his side, say I am the one who asked to be raped. In the court Eshwarappa (referencing MLA Eshwarappa to the defense lawyer) says, ‘How did he do it?’”

At this point, laughter erupted in the Assembly and Speaker Ramesh Kumar said, “Wait, listen to me. He will ask – where did he rape you? What time did he do it? What were the acts he performed?”

“Then when I come out of court, they will ask me if I got justice. Justice received or not, the accused would have raped once but the victim would have gotten raped 100 times in the court. My situation has become like that,” Ramesh Kumar said, to gales of laughter.

Responding to the Speaker’s crass statement, BJP MLA KS Eshwarappa went one step further and said, “By bringing up this issue again and again, we also know how many times you have been raped.”

The Speaker’s insensitive speech and the Karnataka MLAs’ response to it comes days after Ramesh Kumar himself said in the Assembly, “I will tell a legislator to stop talking, if they speak unparliamentary language.”