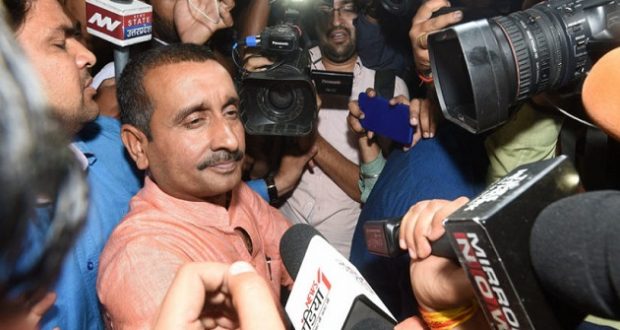 Lucknow: BJP MLA from Unnao Kuldip Singh Sengar, accused in a rape case, surrounded by media persons outside the office of the Senior Superintendent of Police in Lucknow on Wednesday night. PTI Photo by Nand Kumar(PTI4_12_2018_000001B)

New Delhi: The CBI on Friday filed its charge sheet against BJP MLA Kuldeep Sengar and others in connection with the Unnao rape survivor’s accident in which two of her relatives were killed.

In its first chargesheet filed before a special CBI court in Lucknow, the agency charged Sengar and all others named accused in the FIR under sections of the Indian Penal Code (IPC) related to criminal conspiracy and criminal intimidation.

Sengar has been expelled from the BJP.

The woman, allegedly raped by Sengar in 2017 when she was a minor, battled for life after a truck rammed into the car she was travelling in with some family members and her lawyer in Rae Bareli district of Uttar Pradesh on July 28. Two of her aunts died in the road accident. She was airlifted from a hospital in Lucknow and brought to the AIIMS for better care.

Ashish Kumar Pal, driver of the truck which rammed into the car killing the two aunts and leaving the girl and her lawyer critically injured, has been charged with causing death by negligence 304(a), causing grievous hurt by act endangering life or personal safety (338), and rash driving (279). No charges of criminal conspiracy have been slapped against Pal in the CBI charge sheet, said officials.

The CBI in its FIR had booked Sengar and nine others under sections of the IPC related to criminal conspiracy, murder, attempt to murder and criminal intimidation.

The agency also recommended to the Uttar Pradesh government departmental action against some officers but did not reveal their identity. On the day of the accident, none of her security personnel of Uttar Pradesh Police were accompanying the woman. They were later suspended.

Two days after the accident, on July 30, the CBI booked Sengar, his brother Manoj Singh Sengar, Arun Singh, son-in-law of a Uttar Pradesh minister along with seven others.

The agency had taken over the FIR registered by Uttar Pradesh Police which was filed on the basis of statement given by the uncle of the woman. Last month, the Supreme Court had granted two more weeks to the agency to complete its probe into the accident.

After being discharged from AIIMS last month, the victim and her family are currently under CRPF cover here on the directions of the Supreme Court.

The Delhi Commission for Women (DCW) on Thursday sought seven days from a city court to provide accommodation to the victim’s family. The survivor’s kin had earlier told court that they wanted to reside in the national capital apprehending a threat in their native state of UP.

The victim, now 19 years old, was allegedly raped by Sengar on June 4, 2017, when she was a minor but her attempts to file a case did not materialise. Her father was arrested on alleged false charges levelled by the family of Sengar. She had attempted self-immolation in front of Adityanath’s residence to get the probe going in her case last year.

Next day, her father was allegedly assaulted inside the prison and he died of the injuries.

The news grabbed headlines following which the Allahabad High Court took suo motu cognisance of the case and handed over the matter to the CBI, which filed a chargesheet against Sengar in July last year. He was arrested on April 13 last year in connection with the rape case.

A four-term MLA, Sengar, who represents Bangarmau in the UP Assembly, is considered an influential Thakur leader in the region.

The case in a special court hardly progressed since there were no judges to hear the matter.

The rape survivor wrote a number of letters to various authorities, including the Chief Justice of India, saying she was threatened for her life by Sengar’s kin.

A letter dated July 12, written by the survivor and two of her family members, was also sent to the Allahabad High Court and other authorities of the Uttar Pradesh government. Taking note of the letter, the Supreme Court on August 1 had directed the CBI to finish the probe within a week. This deadline was repeatedly increased on the request of the agency.