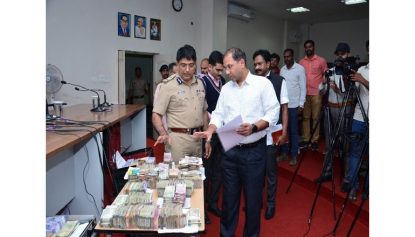 Bengaluru: Sleuths from Central Crime Branch (CCB) acting on the complaints that bookies of the Bangalore Turf Club (BTC) the have been involved in illegal activities, raided the BTC and seized Rs 96 lakh cash.

During the raid, the CCB officials seized Rs 96 lakh cash and detained 40 men, including private bookies.

As per the sources, the money seized was mainly from private bookies and was unaccounted cash. The police have also issued notices to various BTC officials, asking them to appear before them for investigation.

He further added, “On November 15, during the winter race, horses fell, leaving the jockeys injured. This led to a ruckus on the BTC premises as officials cancelled the race. There were also allegations that these bookies were misusing the funds collected.”

It may be recalled that the Public Accounts Committee of the Karnataka Legislature on November 19 directed the state government to stop all activities at the Bangalore Turf Club (BTC) from December 2, and to collect dues that it owes.

The committee has unanimously decided that the government should take steps to collect dues that the racecourse owes to it before December 1, and that all activities there must be stopped from December 2.

Despite its land lease period having expired in 2009, BTC continuing to function there despite successive governments deciding to take over the land, has been taken note of by the PAC at the meeting, the statement said.