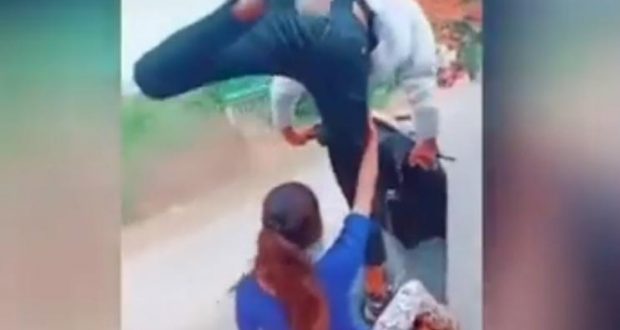 Bengaluru police tracked down and arrested a youngster who appeared in a video performing death-defying stunts on a two-wheeler with a woman riding pillion.

A special police team constituted to nab the man in the video that was widely shared online eventually arrested Noor Ahmed, a 21-year-old from Yelahanka in the city. Noor is a B.Com student at Yelahanka Government First Grade College.

In the video that was shared on Saturday, Noor was seen doing a wheelie at very high speeds on the Devanahalli-Nandi Hill Road. He was not wearing a helmet.

Behind him, a woman, who was also not wearing a helmet, dangerously grabs his right leg to prevent him from falling backwards as trucks and heavy vehicles are seen going past them. The stunt was filmed by a third person accompanying the man and woman appearing in the video.

As per the Times of India, Noor Ahmed is the son of an auto-rickshaw driver and could not afford a two-wheeler. He learned to perform the stunts by borrowing scooters from his friends. For close to 10 months, he would go with friends on weekends and train to do wheelies with them for up to three hours each day. Sometimes, they would train on weekdays too. He hooked himself up with other ‘stunt riders’ and practiced till he believed he was an expert,” a police official who is part of the investigating team, told the Times of India.

Noor also told the police he did not know the woman sitting behind him and that she volunteered to be part of the shoot after she was impressed by his skills. He told the police that her name is Veda. Police traced down Noor through the registration number seen in the video.