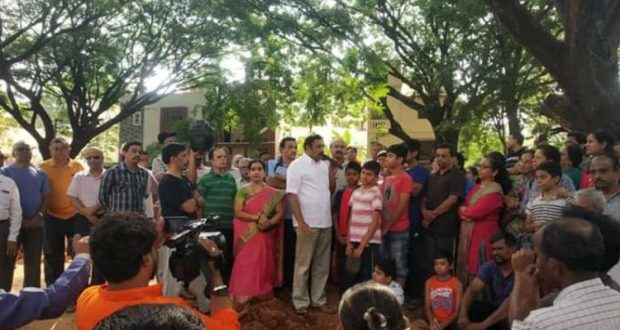 Residents of south Bengaluru’s Girinagar held a demonstration on Friday to protect the only open space they have in the vicinity – a community ground – against the state government’s decision to use it to set up a new police station.

The 120 sq feet area, commonly referred to as the ‘Volleyball ground’, is near Vivekananda Park in Phase 1 of Girinagar. It is marked as a civic amenity site in the BDA layout plan. It is presently used as a playground, as a space to set up small exhibitions, and even a place to learn driving. During school hours, it is also used by a private school as a playground as it doesn’t have one of its own.

“Now all of a sudden, it is being converted to police station; without any prior intimations too. We strongly feel that this area should be reserved for the playground,” said Suresh R, one of the activists who took part in Friday’s protests.

Responding to the agitation, Bengaluru City Police Commissioner T Suneel Kumar has asked the construction work to be put on hold.

Currently the Girinagar Police Station is running out of a cramped two-storey residential building.

The development comes at a time when the ‘Garden City’ has been seeing rapid loss of green and open spaces. A report by the Indian Institute of Science in 2017 said that 78% of Bengaluru’s land surface is currently paved; and if this trend continues, the number will likely increase to a massive 94% by the end of the decade.

More strikingly, a survey by Janaagraha, a Bengaluru-based non-profit organisation,found that only 3% of the total area in the city is parks or open grounds.

The WHO suggests that 15% of a city should be made up of open spaces.

This means that Bengaluru falls short of the prescribed requirement of 10 sq metres of open space per capita recommended by the Urban and Regional Development Plan Formulation and Implementation (2015) guidelines of the Ministry of Urban Development.