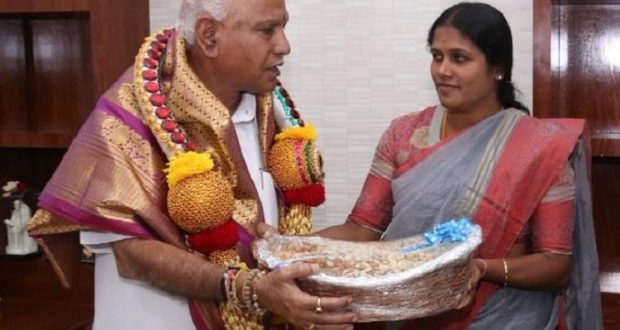 Bengaluru Mayor Ganagambike Malikarjun, who has been actively campaigning against the use of plastic, committed a faux pas by giving a plastic wrap basket of dry fruits to Chief Minister BS Yeddyurappa on July 30. She acknowledged her mistake and took a step to make amends after she was called out.

A video of her presenting the basket to the CM during her courtesy visit went viral and was criticised by environmentalists. The mayor sought to rectify the error by voluntarily paying the mandated fine of Rs 500.

Speaking to Deccan Herald on the issue on Friday, the mayor said, “I don’t know who bought the dry fruits basket wrapped in plastic. Nevertheless, I admit to my mistake and am willing to be punished. Being the mayor of the city, I should set an example to the others. On Saturday, I’ll pay a fine of Rs 500 to the special commissioner (Solid Waste Management),” she told DH.

“We’re in the process of amending the KMC Act, enabling the collection of fines for using plastic. Let it start from me,” she added.

A photograph of the mayor’s fine receipt is also doing the rounds on social media.

In June 2018, the Bruhat Bengaluru Mahanagara Palike (BBMP) decided to slap a Rs 500 fine on consumers if spotted carrying plastic bags in the city. For subsequent violations, users will be fined Rs 1,000.

The mayor and other top officials of the BBMP had been part of several workshops that were organised across the city to educate street vendors, caterers and other large-scale producers to stop the usage of plastic.

Since Saturday evening, a photograph of the Mayor’s fine receipt has been doing the rounds on social media.

Deccan Chronicle quoted her saying, “.., I did not wish to set a wrong example. I voluntarily approached the BBMP Health Wing and paid a fine of Rs 500.”

This drew her appreciation and praise on social media for being upfront about her mistake.