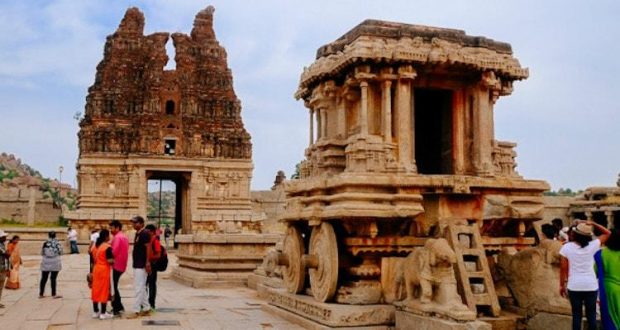 In the second similar incident this year, two stone pillars at the Vijaya Vittala temple at World Heritage site Hampi were found allegedly vandalised. A Bengaluru-based chef, who visited Hampi, has been sent to judicial custody in connection with the incident.

The incident came to light after officials of the Archaeological Survey of India (ASI) noticed Nagaraj, a 45-year-old resident of Yelahanka in Bengaluru, near the pillars.

While Nagaraj maintains that he accidentally toppled the pillars while taking a selfie, officials informed security personnel who immediately nabbed Nagaraj and turned him over to the police. He was charged under sections of the Ancient Monument and Archaeological Sites and Remains Act 1958, the Times of India reported.

According to police, Nagaraj admitted that he had caused the pillars to topple. “Since it had been raining for the last few days, the ground holding the historical pillars on the protected heritage site got loose. When the accused pushed one of the pillars, it collapsed onto another pillar, which also fell to the ground. Though it was unintentional, we have booked a case after the ASI lodged a complaint. We have to respect the heritage monuments and the law in force to protect them,” CK Baba, Superintendent of Police, Ballari, told The Hindu.

This comes seven months after four men were arrested for vandalising stone pillars at a temple in Hampi. They were later ordered by the Judicial Magistrate First Class (JMFC) Court in Hosapete to help in the restoration of the pillars and pay a fine of Rs 70,000 each. Hampi is located in Ballari district of northern Karnataka.

In July, the holy site of Nava Brindavana of Anegundi near Hampi was also found vandalised. Investigations revealed that a priest from Andhra Pradesh along with a group of people had vandalised the structures at the holy site in search of the treasure of Krishnadevaraya, an emperor of the Vijayanagara empire who reigned from 1509–1529.