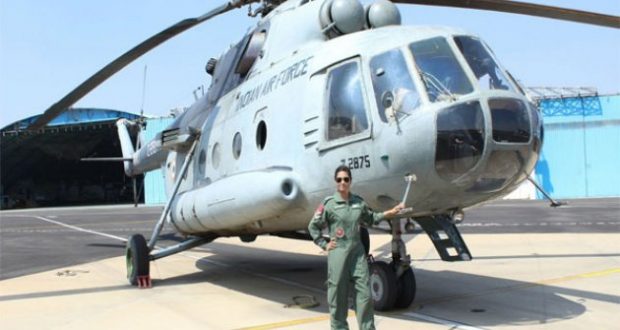 Bengaluru: Flight Lieutenant Hina Jaiswal has created history by becoming the first Indian woman flight engineer to be inducted by the Indian Air Force. She was selected for the prestigious Flight Engineers’ course, after successfully completing the course at 112 Helicopter Unit, Air Force Station, Yelahanka..

Commissioned on January 5, 2015 in the engineering branch of the IAF, Hina has served as Chief of firing team and battery commander in a frontline Surface to Air Missile squadron, before being selected for the prestigious Flight Engineers’ Course. She successfully completed the course and earned her Flight Engineer’s wing February 15, 2019.

During the course of six months of grueling training, she trained shoulder to shoulder with her male counterparts, and displayed unflinching commitment, dedication and perseverance.

Hina hails from Chandigarh and has completed her Bachelor of Engineering degree from Panjab University. The only daughter of DK Jaiswal and Anita Jaiswal, Hina describes her achievement as a “dream come true”.

“Since childhood, she had aspired to don the soldier’s uniform and take on the skies as an aviator. Finally, her dreams have manifested into reality after successfully graduating from the alma mater of Heli-lift” a release from IAF said.

“As a Flight Engineer, she would subsequently be posted to operational helicopter units of the IAF. While in the unit, she would be routinely called upon to operate in demanding and stressful conditions, right from the icy heights of the Siachen Glacier to the seas of the Andamans. Hina is enthusiastic about her stint in aviation and looks forward to embracing challenges with open arms,” the release added.

In the last few decades, the Indian defence forces have taken long strides to become more gender inclusive. The Indian Air Force since 1993, has commissioned women in the officer cadre and they have also been successfully inducted as pilots in various streams of the IAF. In 2018, the Flight Engineer branch which was exclusively the domain of male air warriors, was opened for women officers. Flight Engineer is the member of an aircraft’s flight crew who monitors and operates its complex aircraft systems requiring a specialized skill set.

Previous: Kannadigas to get priority in private sector jobs in C and D categories: Minister Krishna Byre Gowda
Next: Soon, you cannot be added to WhatsApp Groups without your permission