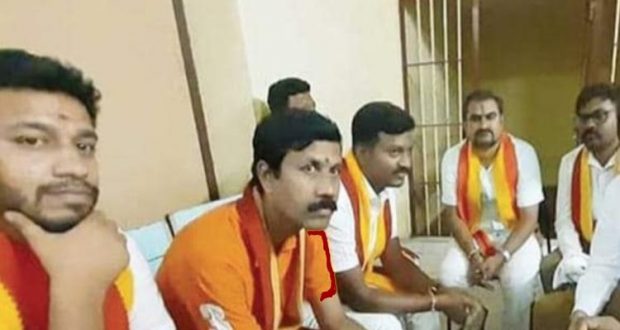 The incident took place near the Jain temple along Bhagwan Mahaveer Jain Road in Bengaluru on Friday evening. According to the Commercial Street Police, the members of the Jain Community had erected a hoarding outside Ganesh Bagh prayer hall regarding Chaturmas, a holy period for the Jain community reserved for fasting and penance.

When the vandalism took place, only two security guards were present at Ganesh Bagh. In the video, the activists are seen shouting at the security personnel and speaking with them in Kannada, even as they could not understand the language.

Soon after the video went viral, a member of the federation, Trilok Chand, filed a complaint with the Commercial Street Police station alleging that the pro-Kannada activists were trying to provoke enmity on religious and linguistic grounds.

The Commercial Street police registered an FIR against six persons under sections 153A (promoting enmity on the basis of religion and language), 427 (property damage), 504 (intentional insult to provoke breach of peace) and 506 (criminal intimidation) of the IPC.

#ReleaseKannadaActivists began trending on Twitter as news of the arrest spread with several pro-Kannada activists demanding that the activists must be released from jail.

The issue became political with former Chief Minister HD Kumaraswamy demanding that CM Yediyurappa withdraw the case against the pro-Kannada activists. “Respected Chief Minister, please withdraw the case registered against pro-Kannada activists. You can show your masculinity by convincing the Centre to allocate funds (flood-related) required for the state,” Kumaraswamy said in a tweet.

Karnataka President of the All India Jain Minority Federation, Prasanna Sancheti on Sunday met Chief Minister BS Yediyurappa in connection with the issue. Speaking to the media after the meeting, Sancheti said that Yediyurappa had assured members of the Jain community that action will be taken against the six accused. “CM Yediyurappa has assured us that he will direct DG and IGP Neelamani Raju and city Police Commissioner Bhaskar Rao to take stringent action against the miscreants who ransacked the place and tore the banners put up at the entrance of Ganesh Bagh,” he added.

Prior to this BJP MP Tejasvi Surya had tweeted condemning the attack and said that he was , “Deeply hurt over attack on our Jain brothers in B’luru over हिन्दी on a banner of a temple by few rowdy elements”.

However, he was called out for communalising the issue by adding in his tweet that such protests were never over the use of Urdu in Bengaluru.

The events that transpired

Speaking to TNM, Parmesh Jain, a member of the All India Jain Minority Federation, alleges that this was the fourth incident in a span of one month. Paramesh alleges that pro-Kannada activists have vandalized hoardings outside several Jain temples and prayer halls since the beginning of August in Bengaluru.

“This is the fourth incident in one month. First, it happened in Vijayanagar, then in Mysuru Road and on Friday they vandalized the hoardings near Infantry Road. Yesterday (Sunday) pro-Kannada activists did the same thing at Kumbalgod area. We have our shrine at the place and devotees from across the country, mostly from north India, come here during Chaturmas for prayers. We had used a larger font for Hindi so that people can identify the prayer halls easily. The Kannada mandatory on boards rule applies to commercial establishments only. How can these people not understand that?” Parmesh questioned.

“No one should show muscle power and hurt the sentiments of each other. Bengaluru city is inclusive and everyone’s sentiments must be respected. We urge everyone to avoid conflict and spreading of fake messages on social media,” Bhaskar Rao added.

Speaking to TNM, President of Karnataka Rakshana Vedike (KRV), T Narayana Gowda said that the protests were carried out by various pro-Kannada groups and not only KRV. He added that they had spoken to the community about including Kannada, but they did not.

“There was only one member from KRV, Anjanappa. Harish Kumar is from Kannada Ranadheera Pade. There are so many small pro-Kannada groups whose members were part of protest. We had spoken to the members of the community several times in the past and asked them to include Kannada in the hoarding. We did not say they must not use Hindi or any other language. On Friday and Sunday, the hoardings were torn because when our activists were shouting slogans, the members of the Jain community said that they would not use Kannada at any cost. That’s why the hoardings were brought down,” Narayana Gowda said.