Home / State / Another student held for ‘pro-Pakistan’ slogans in Bengaluru 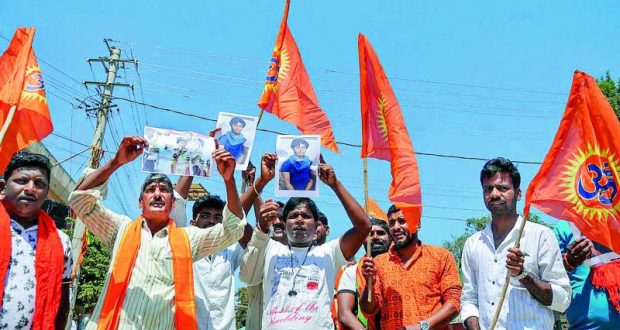 Bengaluru/ Chikkamagaluru: At a time when people are yet to recover from the shock of seeing a young woman, Amulya, raising pro-Pakistan slogans another college student has also done it carrying a placard which read ‘Liberation to Jammu and Kashmir, Muslims, Adivasis, Dalits’ in Kannada, at an anti-CAA protest near Town Hall in Bengaluru.

It happened during a protest called by various Kannada organisations against the Citizenship Amendment Act on Friday. Arudra who is said to be a student of a college in Malleswaram, was taking part in the protest when she suddenly displayed the placard which stunned the organisers.

The police detained her and took her to Sampangiramanagar police station. The police said Arudra is a Facebook friend of Amulya Leona. However, Arudra is said to have denied her connection with Amulya.

Additional commissioner of police (West) Soumendu Mukherjee would be interrogating the student activist. DCP (Central) Chetan Singh Rathod said that the police have slapped cases under IPC sections 153 A 2 and 153 B and Arudra has been taken for medical tests.

Meanwhile, the house of Amulya came under attack allegedly from right-wing Bajrang Dal activists, who pelted stones at the house and smashed the wooden window frames.

Narrating the incident, Amulya’s father Oswald Noronha (Vaji) said he left his house before Bajrang Dal activists stormed his house with stones and sticks and started attacking the windows. “I stood silently in the cover of darkness while the mob entered the house and started their attack despite people in the vicinity asking them not to do so,” he recalled.

Later, police arrived at the spot and provided security to Vaji who lodged a formal police complaint on the attack at around 2 pm on Friday.

When the attack happened, Vaji’s wife had been to Theerthahalli to visit her maternal home.

Vaji said, “I could not establish contact with my wife after Amulya’s arrest. I do not know where my wife is — whether she is in Theerthahalli or in Bengaluru.”

Regarding supporting his daughter, Vaji is non-committal on securing bail for Amula. He said, “Her act is unpardonable and I will not strive to secure bail for her. But, I do not know about my instincts as a father.”

He said, “She has hurt me and society with her act. I had asked her to refrain from inflammatory statements but she did not pay heed. I told her that Prime Minister Narendra Modi and Union ministers hold offices of high esteem and she should respect their positions and also their age.”

Chikkamagaluru superintendent of police Harish Pandey told Deccan Chronicle that a First Information Report (FIR) has been registered by the police based on the complaint filed by Vaji. “We are trying to identify who they are since the attack occurred in the cover of darkness.” he said and also revealed that no arrests have been made so far in the attack on Vaji’s house.

Meanwhile, hundreds of pro-Hindu outfits especially from Bajrang Dal took to the streets holding a protest rally in Koppa town on Friday against Amulya.

An effigy of Amulya was burnt in Koppa while Bajrang Dal convenor Tudukuru Manjunath told Deccan Chronicle that Dal activists will keep a watch on her entry if she is granted bail in the case. He warned that if she dares to enter Koppa or Chikkamagaluru again, then, she would have to face dire consequences.