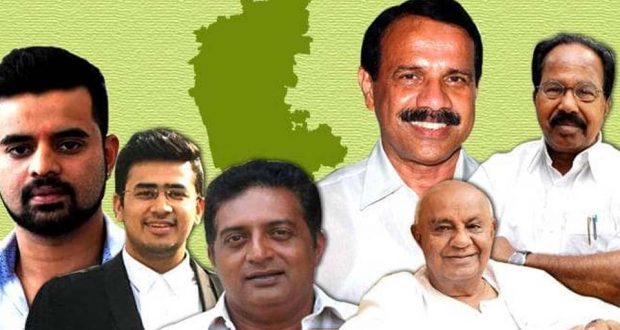 61.84 per cent voter turnout reported till 5 pm in first phase of LS polls in Karnataka

Bengaluru, Apr 18: An estimated 61.84 per cent voter turnout was reported in the elections to 14 Lok Sabha seats in Karnataka in the first phase on Thursday with a direct contest between the ruling Congress-JD(S) alliance and the BJP.

Dakshina Kannada recorded the highest turnout of about 72.97 per cent, while the lowest was reported in Bangalore Central constituency with 45.34 per cent, poll officials said.

The officials who gave the polling percentage as of 5 pm said it was likely to go up.

In other constituencies of city that has the history of low voter turnout, Bangalore North recorded 48.19 per cent,Bangalore South 49.36 per cent and Bangalore Rural 58.39 percent.

Polling of 70.23 per cent was recorded in Mandya, where Chief Minister H D Kumaraswamy’s son Nikhil is pitted against multi-lingual actress Sumalatha Ambareesh in what is perceived to be a cliffhanger contest.

In Tumkur, where former Prime Minister H D Deve Gowda is locked in a tough contest with G S Basavaraj of BJP, 70.28 per cent turnout was reported.

Hassan where Gowda’s other grandson Prajwal Revanna is contesting against A Manju of BJP, reported 71.20 per cent voting till 5 pm, a hour before the poll ended.

Mandya, Mysore, Tumkur and Hassan are the constituencies where the ruling Congress-JD(S) faced dissidence among the grass root workers of their party who are not happy with the seat sharing arrangement.

Both parties that have been fighting against each other for decades, joined hands to form the government after assembly polls last year, as the election threw up a hung verdict.

As per the alliance arrangement, both parties decided to fight the Lok Sabha polls together, which is something that the leadership of Congress and JD(S) has not been able to convince their party men on.

In Mandya, the rebellion within Congress is open to an extent that many of them locally supported Sumalatha.

BJP, which has set a target of bagging at least 22 out of total 28 seats, is hoping to win the maximum number of seats in the first phase riding on the “Modi wave”.

Of the 14 constituencies that went to the polls, the BJP and Congress had won six each in 2014 Lok Sabha elections, and JD(S) in two.

While the BJP is contesting in 13 constituencies and supporting Sumalatha, Congress and JD(S) have fielded candidates in 10 and four constituencies respectively.

Voting began at 7 am in 30,164 polling stations that are mostly in the southern parts of the state covering almost the entire old Mysuru region and a few coastal districts.

A total of 2,67,51,893 voters were eligible to exercise their franchise in the first phase with 241 candidates in the fray.

The remaining 14 constituencies, mostly in northern districts, will go to polls in the second phase on April 23.