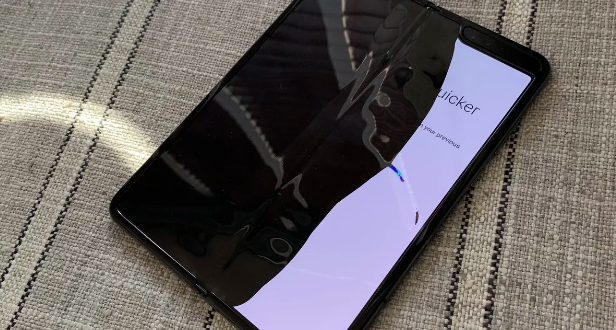 Samsung recently unveiled its most anticipated and futuristic smartphone — Samsung Galaxy Fold, the South Korean giant’s first foldable smartphone. The phone, which is slated to go on sale later this month, has already been offered to a few reviewers and it seems that the build quality is highly questionable.

Several reviewers have complained that their unit broke down after just a few days of usage. Mark Gurman, a reviewer from Bloomberg said that his unit completely broke down and is unusable after just two days while Dieter Bohn from The Verge called out a “small bulge” on a defective hinge. CNBC’s Steve Kovach also tweeted about the display on his review unit which has started flickering.

Mark Gurman said that the display of his Galaxy Fold busted after he took off a “protective layer/film”. YouTuber Marques Brownlee (MKBHD) also encountered a similar issue after he removed the film. Well, as it turns out, it’s not a protective film and the company says that it shouldn’t be removed.

In response to all this, Samsung released a statement and said that it “will thoroughly inspect these units in person to determine the cause of the matter.” Below is the full statement from the company.

As for the specifications, when open, the Galaxy Fold smartphone presents a 7.3-inch Infinity Flex Display with a 1536 x 2152 resolution. In this mode, you can use three apps at the same time which Samsung calls Three-app Multitasking.

When folded into phone mode, it offers a 4.6-inch 840 x 1960 display. It comes with a feature called App Continuity which automatically adjust an app when you switch screens. It is powered by a 7nm processor paired with 12GB of RAM.

For the first time in a smartphone, it comes with UFS 3.0 storage with a 512GB capacity. Samsung says there are six cameras – three on the back (when folded in phone mode), one in front (also in phone mode), and two inside (in tablet mode). The camera module is made up of a 16MP ultra-wide camera, a 12MP telephoto camera, and another 12MP wide-angle camera. The selfie camera is a 10MP sensor.

It runs the latest Samsung One UI with Android 9 Pie operating system out-of-the-box. The phone packs a 4,380mAh battery which is split into two units. With a starting price of $1,980, the Samsung Galaxy Fold is set to be available for purchase from 26th April. Even after these issues, there’s reportedly no impact on the phone’s availability next week.