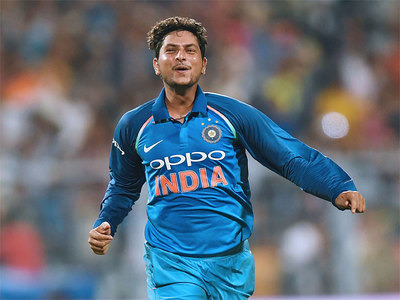 Wrist spin was once again the order of the day as South Africa’s misery continued in the One-Day International series against India. The task was always going to be tougher following Faf du Plessis’ untimely injury. With AB de Villiers also not playing, the middle order found it tough to handle Yuzvendra Chahal and Kuldeep Yadav on a surface that had assistance for them. In the end, the two spinners vindicated Virat Kohli’s decision to field first by bowling out the hosts for 118 on Sunday (February 4) in front of a disappointed Centurion home crowd.

At one point, everyone was left wondering about the venue of the contest due to the behavioural pattern of the pitch and the kind of noise the Indian contingent was seen making. With the South Africans getting bowled out by the 33rd over, the chase began without the lunch break as Rohit Sharma and Shikhar Dhawan looked to complete the formalities as soon as possible. Rohit once again pulled Morne Morkel for a delightful six like he did last game, but after striking Kagiso Rabada for a couple of more boundaries, he fell prey to a short ball from the youngster for 15, after surviving a close call for caught behind early on.

Virat Kohli and Dhawan then kept finding the boundaries at regular intervals as India cruised towards the target. The umpires did extend the session by a few overs in order to allow India polish off the target but eventually, lunch was called with the visitors needing just two more runs to win. The decision irked many as India came back after 40 minutes to go 2-0 up.

The result though, was a foregone conclusion much earlier. South Africa knew they had to dig in deep the moment Kohli inserted them in. The onus was on Quinton de Kock and Hashim Amla to bat for a long period especially with an inexperienced middle order to follow. Both Amla and de Kock’s recent record in Centurion was top class but when it mattered the most, they were kept subdued by India’s new ball bowlers. De Kock, in particular, had a horror start when he chopped one back onto the stumps off his first ball but luckily, it didn’t dislodge the bails since it hit the target at a slow pace.

Only 14 runs came off the first six overs before Amla collected a couple of boundaries off Bhuvneshwar Kumar. De Kock then targetted Hardik Pandya to fetch some quick runs before the end of the powerplay but India got the big fish soon after. After creaming Bhuvneshwar through the covers, Amla edged one behind to the wicketkeeper when the bowler shortened his length and cramped the batsman for room. The wicket came in as a huge blow for the hosts with Amla being one of the better-equipped batsman against spin. But the real shocker came in shortly when de Kock and new captain Aiden Markram departed in identical fashion off Chahal and Kuldeep respectively.

The spin duo didn’t even have to beat these two batsmen in flight for that matter. They bowled long hops and on both occasions, the batsmen got excited and tried depositing the ball in the stands, only to be caught by the man at the deep midwicket boundary. David Miller, perennially troubled by spin throughout his career, lasted just three balls before edging Kuldeep to the slip fielder to depart for a four-ball duck. Three wickets in the space of six balls crippled the hosts.

Quite surprisingly though, it was the debutant Khaya Zondo who looked assured against both the spinners. Zondo played them late and looked to rotate the strike alongside the veteran JP Duminy as the duo resurrected the innings. By the halfway mark, South Africa had reached 95 for 4 with a lot of work left to be done.

Zondo, who had been watchful until then, suddenly played an uncharacteristic release shot off Chahal that led to his downfall as the top edge was pouched by Pandya.

Two overs later, Duminy missed a sweep off Chahal to get adjudged lbw and when he wanted the decision to be reviewed, he was reminded by the umpire and Chris Morris about Amla using it up earlier when he was caught behind. At 107 for 6, the game was only headed one way as the Indian bowlers ran through the tail to bowl them out for 118.

More than the defeat, the lack of fight and the mode of dismissals would concern South Africa. Also, the fact that the match lasted only 52.5 overs in total would be embarrassing for the hosts. Unless they sort out their batting issues, there could be more in store.