Home / India / Why govt not allowing debate on price rise, GST: Congress on disruptions in Parliament

Why govt not allowing debate on price rise, GST: Congress on disruptions in Parliament

New Delhi(PTI): Amid a stalemate in Parliament, the Congress on Tuesday asked why the government is not allowing an urgent debate on price rise and GST when the entire opposition was demanding it.

Senior Congress leader Jairam Ramesh said a debate under Rule 267 has been held several times in the past on issues of demonetisation, Jammu and Kashmir, and agri crisis among others.

“Entire Opposition is demanding an urgent debate on price rise and GST in Rajya Sabha under Rule 267. The rule has been invoked a number of times, most recently on 16.11.16 to debate on demonetisation, on 10.08.16 to discuss Jammu and Kashmir, and on 23.04.15 to debate on agrarian crisis. Why is the Modi government refusing now,” he asked.

Both Houses of Parliament have failed to transact any significant business in the wake of continued protests by the opposition over demands for an urgent discussion on price rise and GST while setting aside all other business.

The government claims it will hold a discussion once Finance Minister Nirmala Sitharaman recovers from COVID-19 and is back. Bandipora man writes Quran by hand on a 500-metre scroll 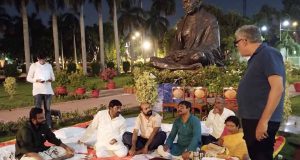