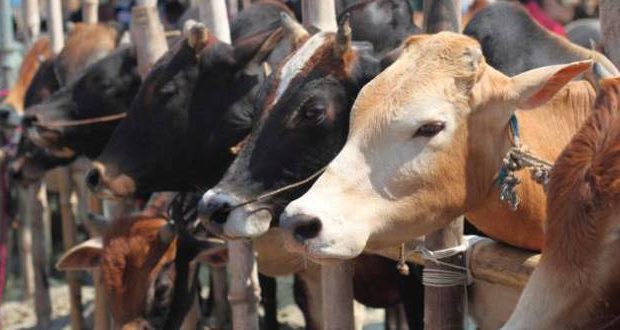 Jaipur: According to the recent sources, 700 and more cows, are reported dead due to heavy rainfalls in Jalore District of Rajasthan.

This agonizing incident is reported from Pathmeda village, one of the biggest gaushalas shelters in the country accommodating around 10,500 cows.

One of the Gaushalas conservator Govind Ballabh, speaking about the incident, said these 18 shelters have around 39,000 cows and calves.

“It rained for 3-4 days because of which the cows became extremely weak and sat down on the ground. In such cases, they can’t get up on their own and have to be lifted up and tended to. Their fodder had also gone bad because of the rain,” the conservator said.

Most of the cows have died due to starvation and weakness said Govind.

Emphasizing on the current condition of these cows, he said another 3,300 cows and calves are injured and the treatment is being carried out by the shelter officials.

30 cows were reported to have been washed away after a dam broke in Panchla and about 30 more were reported dead by sinking into the mud he said.

“When we got the news of the dam breaking, we moved the cows to a higher ground but the nature of the cow is such that it always goes back to its barn” Govind added.

District collector Laxmi Narayan Sharma claimed that additional veterinarians were deployed to look after the cows and sufficient medication is also being provided to make them healthy again.
500 hundred cows were reported dead in two weeks in July in Jaipur’s Hingonia Gaushala.

The communal violence that has taken over a secular nation like India were innocent minority community is brutally killed, lynched, thrashed, by cow vigilantes or on any other pretext. Where the law and order sit silent against the uprising violence by perpetrators belonging to various vigilante groups and yet they let the cattle die of starvation and negligence.

Taking human life, killing them is a crime according to IPC and the accused are imprisoned yet there is no law against these perpetrators who roam freely after killing and lynching.

Killing a cow serves 14 years of imprisonment whereas the accused walks free after the murder of a human.

Starving the cattle to death, neither the Government nor these self-claimed ‘Gau Rakshaks’ is nowhere to be seen helping the cattle.

So far 26 cases of cow vigilantism have been reported in India.