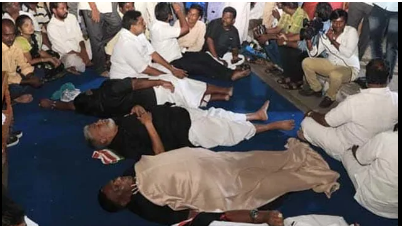 Puducherry Chief Minister V Narayanasamy pulled off an all-nighter and slept on the road outside Lieutenant Governor Kiran Bedi’s residence in the latest case of power struggle between the Union Territory’s Congress government and the former IPS officer.

What triggered the protest was Ms Bedi’s idea of making wearing helmets compulsory for motorists with immediate effect. Mr Narayanasamy, however, was against it and wants the rule to be implemented it a phased manner.

Mr Narayanasamy, who began his sit-in on the road outside the Lieutenant Governor’s residence last evening, tweeted pictures of him sleeping on the road, with a thin shawl as blanket. While the ministers and legislators from the Congress and DMK too spent the night with him, the Puducherry assembly speaker met them last evening. The chief minister is wearing a black shirt and a black veshti or dhoti.

Mr Narayanasamy is demanding that Kiran Bedi sanction for 39 government proposals, including a free rice scheme.

“It is an obstruction by Kiran Nedi on the instruction of Narendra Modi. This is a conspiracy hatched by the Prime Minister using Kiran Bedi to create day-to-day problems for our government,” he told NDTV.

Mr Narayanasamy’s action invited a sharp response from Kiran Bedi, who shot off a letter to him, terming his protest “unlawful”. “Instead of waiting for my response to your February 7 letter, you have come to Raj Nivas, demanding a reply in this unlawful manner,” she said. “This method (sit-in protest) is unheard of from a person of your position,” the Lieutenant Governor said in the letter, which was hand-delivered to the chief minister.

Ms Bedi invited Mr Narayanasamy for a detailed discussion on February 21. The Lieutenant Governor said nothing was pending at the Raj Nivas, as alleged.

Kiran Bedi, who was in charge of traffic in Delhi, had turned traffic cop on Sunday to raise awareness on road safety. During a campaign to mark National Road Safety Week, Ms Bedi stopped two-wheelers on a busy road in Puducherry and asked bikers to wear helmets. She alleged that V Narayanasamy’s government is stopping the enforcement of road safety rules.

On Tuesday, legislators of the opposition AIADMK broke helmets on the premises of the Puducherry assembly over the mandatory helmets rule. They also flayed her style of functioning which, they said, was arbitrary.

DMK chief MK Stalin slammed Ms Bedi and the ruling BJP at the centre. “The BJP has turned Governors into their party general secretaries. This is an example,” he tweeted.

Kiran Bedi, has been at loggerheads with the Puducherry government on various issues. Mr Narayanasamy and the Congress have accused her of delaying clearance to welfare schemes, bypassing the elected government and criticised her weekly field visits.