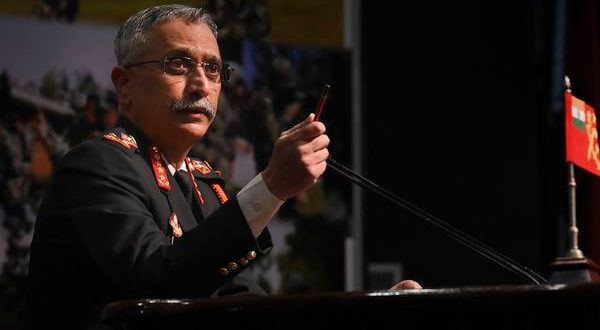 If we get orders, we’ll take appropriate action: Army chief on PoK

New Delhi: Indian Army chief Manoj Mukund Naravane on Saturday said the Indian Army will take steps to wrest Pakistan occupied Kashmir (PoK) from Islamabad’s control if Parliament wanted it and if the Indian government gave such an order.

Addressing his customary press conference ahead of Army Day on 15 January, Naravane, who took over as the chief of the Indian army on 31 December, also warned of possible collusion between Pakistan and China in Kashmir’s Siachen area with any link up between the two “all weather friends” in the region posing a threat to Ladakh.

He also said India and China had would set up a hot line between senior military commanders to ensure better communication to maintain peace and stability along their common borders.

Recalling that a 1994 parliament resolution had stated that the entire state of Jammu and Kashmir belonged to India, Naravane said: “There is a parliamentary resolution that entire Jammu and Kashmir is part of India. If Parliament wants that area (PoK) should be taken we will definitely do so and appropriate action will be taken accordingly,” Naravane said in response to a question.

The army chief’s remarks are certain to evoke a sharp response from Pakistan which also claims the whole of Jammu and Kashmir. Islamabad has been particularly livid by India’s move integrating Kashmir with the rest of the country by through an amendment of its constitution. India’s parliament in August revoked the special status accorded to Kashmir by scrapping a temporary provision in its constitution. New Delhi also divided the state into two Union territories directly administered by the central government, this integrating it with the rest of the country. The move in effect takes the part of Kashmir under Indian administration off the table of talks with Pakistan and focuses attention on the Pakistan controlled part — something that has infuriated Islamabad.

In his press conference, Naravane said the formation of the Chief of Defence Staff (CDS) and creation of Department of Military Affairs is a very big step towards integration of the three services.

“The formation of the Chief of Defence Staff (CDS) and creation of Department of Military Affairs is a very big step towards integration and we on our part will make sure that this is a success,” he said. The post of CDS was created last month with Naravane’s predecessor, Bipin Rawat being named India’s first CDS. One of the missions of the CDS is to promote integration and cohesion in the working of the three services.

Naravane also reaffirmed the Indian army’s allegiance to the Constitution.

“As the Army, we swear allegiance to the Constitution of India…Justice, liberty, equality, and fraternity enshrined in the Constitution should guide us,” he said. The comments come n the back of charges by the opposition parties in India that the three services were being politicized.

On defence preparedness, Naravane said all training of the services would aim to combat futuristic challenges.